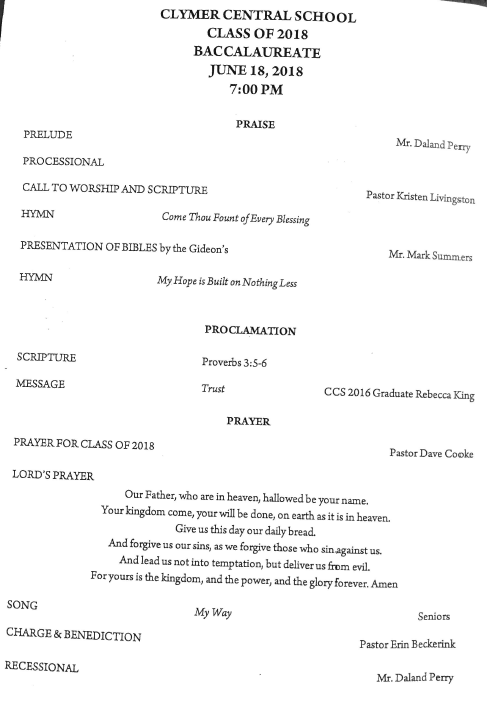 A New York school district has agreed to drop baccalaureate services and prayers at commencements after the Freedom From Religion Foundation asked it to end these unconstitutional practices.

A concerned Clymer resident contacted FFRF to report that the Clymer Central School District had been sponsoring an annual baccalaureate service for graduating seniors held at Clymer Central School. Last year, a district music teacher led the prelude and recessional at the service, which also included messages from three different pastors, scripture reading, a recitation of the Lord’s Prayer, and a distribution of bibles by the Gideons. Last year’s senior commencement ceremony also opened and closed with prayer.

FFRF requested that the school district completely dissociate from the baccalaureate ceremony. Given that Clymer Central School was hosting the ceremony on campus, had it on the official school calendar, and involved school personnel in the ceremony itself, any reasonable graduating senior or parent would conclude that the event was school-sponsored, and that the district endorses the services’ religious messages, FFRF noted.

“The Establishment Clause of the First Amendment prohibits public schools from sponsoring any type of religious practices,” FFRF Legal Fellow Colin McNamara wrote to Superintendent Ed Bailey. “Baccalaureate programs are religious services that include prayer and worship. Schools may not in any way plan, design or supervise baccalaureate programs.”

“School officials may not invite a student, teacher, faculty member, or clergy to give any type of prayer, invocation or benediction at a public high school graduation,” McNamara wrote to the superintendent. “This is settled law — high school graduations must be secular to protect the freedom of conscience of all students.”

“Clymer CSD will not be hosting baccalaureate service this year nor will we open or close our commencement ceremony with prayer,” Superintendent Bailey has responded in an email.

FFRF is appreciative of the willingness of the district to rectify its mistakes.

“Official endorsement of a religiously tinged baccalaureate ceremony and the infusion of prayers at the commencement is an affront to those who do not profess Christianity,” says FFRF Co-President Annie Laurie Gaylor. “We’re glad school officials are toeing the constitutional line and ensuring that the ceremony to culminate 13 years of secular education remains free of proselytizing.”

The Freedom From Religion Foundation is a national nonprofit organization with over 31,000 members across the country, including 1,700 members in New York. Its purpose are to protect the constitutional separation between state and church, and to educate the public on matters relating to nontheism.