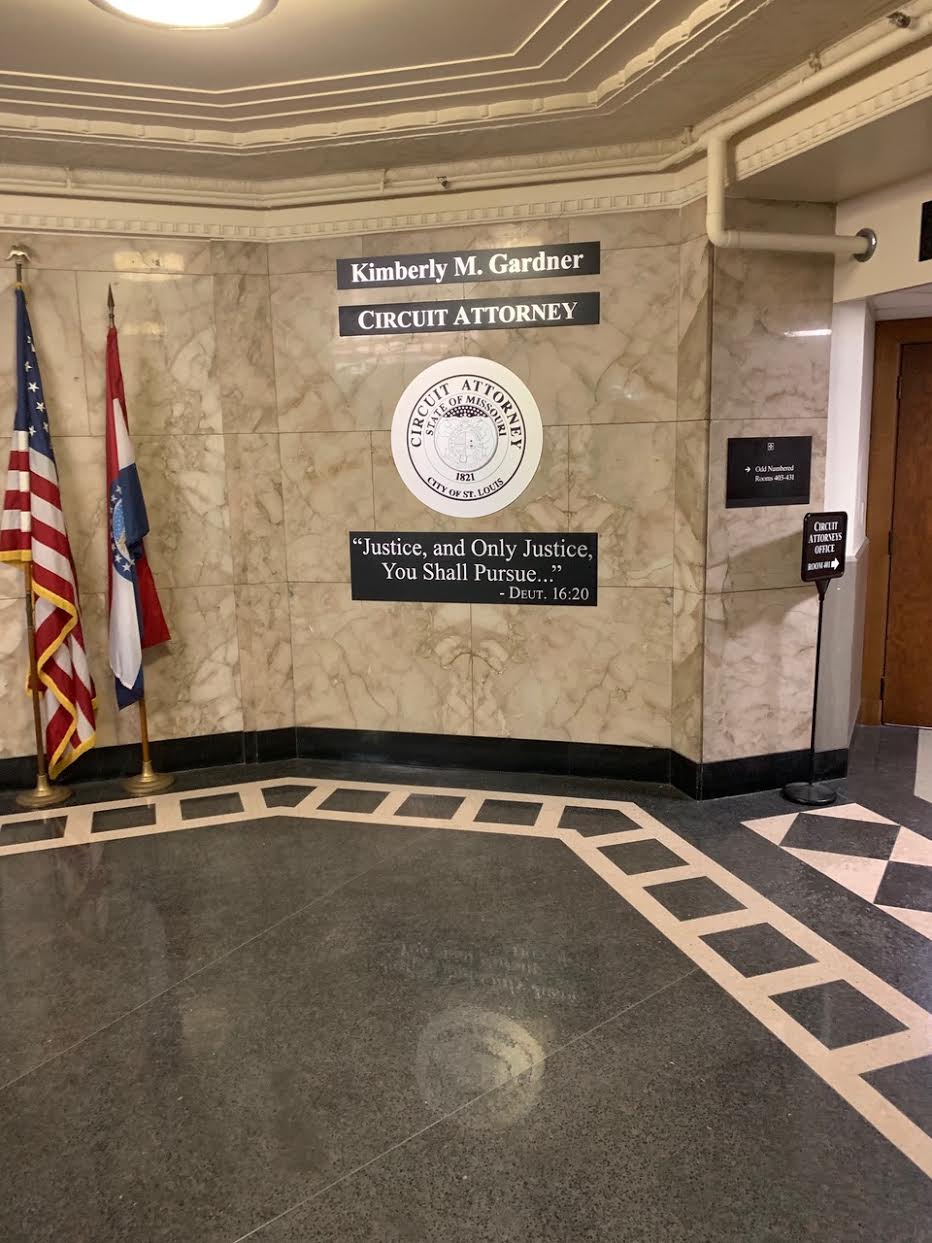 An Old Testament verse displayed at the St. Louis circuit attorney’s office must be immediately taken down, says the Freedom From Religion Foundation, a national state/church watchdog.

A concerned resident of St. Louis County informed FFRF that a bible verse is prominently displayed at Kimberly Gardner’s office in the Carnahan Courthouse. The verse is reportedly affixed to the wall directly outside of the office, right beneath plaques bearing Gardner’s name, title and the seal of the St. Louis circuit attorney. The verse reads: “Justice, and Only Justice, You Shall Pursue…” (Deuteronomy 16:20).

Federal courts have also consistently upheld restrictions on religious displays on government property. The 9th U.S. Circuit Court of Appeals has stated that the “government has a greater interest in controlling what materials are posted on its property than it does in controlling the speech of the people who work for it.” The 5th Circuit has likewise held that religious displays on government property impermissibly endorse religion.

What’s also important to emphasize here, FFRF says, is that the circuit attorney’s office is charged with serving all citizens regardless of belief or nonbelief. A bible verse alienates the one in five St. Louisans who is nonreligious and expresses a preference for Judeo-Christian faith in a government building responsible for administering and upholding our laws.

Furthermore, references to Old Testament law are simply inappropriate for the top prosecutor in St. Louis to display. Those familiar with the Old Testament know that the Book of Deuteronomy primarily consists of Moses’ exhortations to his people to rigorously follow the biblical God’s many commandments. It is the strict adherence to those laws that this verse refers to as “justice.” In its full context, the Deuteronomy 16:20 verse reads: “Justice, and only justice, you shall pursue, so that you may live and occupy the land that the Lord your God is giving you.” This is immediately followed by a warning not to worship any other gods or else risk invoking Yahweh’s wrath. Prohibitions against the worship of any god but Yahweh are an incessant refrain throughout Deuteronomy, a proscription that is wholly incompatible with our secular Constitution. More alarmingly, Deuteronomy decrees that all nonbelievers, practitioners of other religions, and apostates must be exterminated with prejudice, and that it is the public’s duty to see that these infidels are executed. Deuteronomy goes so far as to order every follower of Yahweh to murder apostates, whether they be your own parent, child or dearest friend.

This theocratic notion of justice stands at odds with the enlightened principles embodied in our Bill of Rights — principles like due process, humane punishment and the absolute freedom of conscience, which the circuit attorney has sworn to defend. It would be appropriate, as well as constitutionally prudent, for the walls of the circuit attorney’s office to reflect a commitment to a more rational and progressive system of justice, FFRF exhorts. It asks for the Deuteronomy 16:20 verse to be yanked off at once.

“The display of such a verse in a circuit attorney’s office is inappropriate on several levels,” says FFRF Co-President Annie Laurie Gaylor. “We don’t need Old Testament notions of justice to be adorning official spaces.”

The Freedom From Religion Foundation is a national nonprofit organization with more than 31,000 members across the country, including in Missouri. Its purposes are to protect the constitutional separation between state and church, and to educate the public on the topic of nontheism.