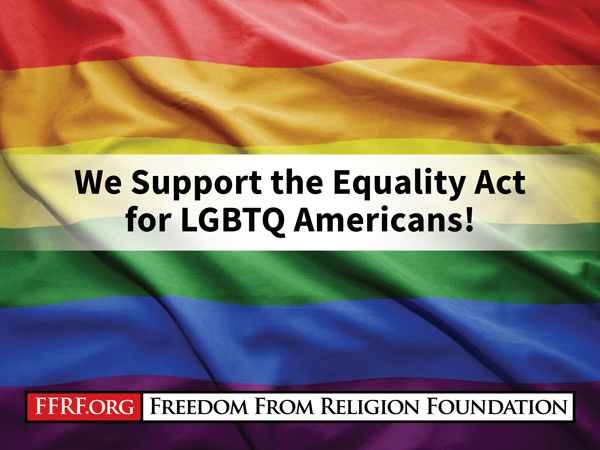 Discrimination against LGBTQ Americans — often rooted in bigoted religious beliefs — is still rife in this country. Today, the Equality Act was again proposed in both houses of Congress to protect them from this hatefulness.

The Civil Rights Act prohibits discrimination against particular classes of people, including bigotry based on their religion, race, and sex, but, sadly, not the prejudice they face on the basis of their sexual orientation or gender identity. This means it’s up to states, counties and cities to decide whether or not to specifically safeguard LGBTQ individuals as a class under their civil rights acts and ordinances. Some states, like Colorado, site of the “gay wedding cake” case, protect LGBTQ citizens, but about 20 states do not. The Equality Act will correct this omission.

“Civil liberties should not be dependent on the state you live in, or be subject to the tyranny of religious dogma,” says FFRF Co-President Annie Laurie Gaylor. “In a nation where our Constitution guarantees equal protection, and ‘Equal justice under the law’ is etched on the building housing our Supreme Court, it is simply wrong that LGBTQ individuals have rights in some cities, counties or states, but none in others.”

“For too long, religion has imposed its Bronze Age immorality on public accommodations and civil rights laws,” argues FFRF Co-President Dan Barker, “it’s time to protect all Americans, whatever slander the bible may contain about them.”

While the House is almost certain to vote on the bill, its chances of seeing a vote in the Senate are less clear. What is clear is that the only organized opposition to the Equality Act is religious in nature, which is why FFRF works so hard to ensure that religious doctrine is not inscribed in U.S. civil laws or social policy.