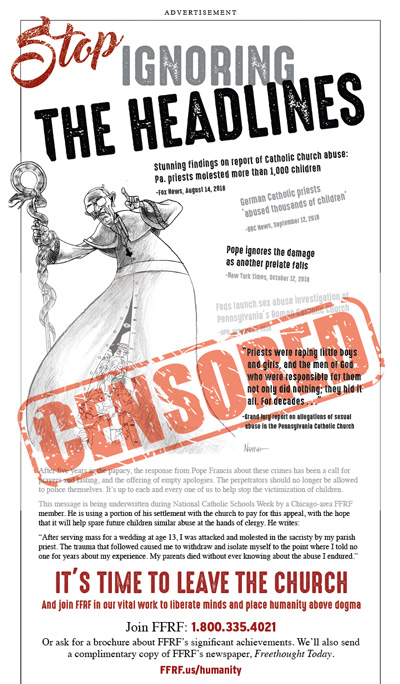 The Catholic Church’s clout in the Chicago area has resulted in the Windy City’s two daily newspapers rejecting a Freedom From Religion Foundation media campaign that spotlights a survivor of priest abuse. The ad urges: “Stop ignoring headlines: It’s time to leave the Catholic Church.”

Chicago’s alternative weekly, the Chicago Reader, has demonstrated more bravery than its daily peers, and is today, Jan. 31, publishing a version of the full-page ad in this week’s edition.

A Chicago-area member who was sexually abused at age 13 by his parish priest suggested and underwrote the FFRF ad and is using a portion of his church settlement to pay for the plea to the public to abandon the Catholic Church. The person asked that the ad be timed to run during National Catholic Schools Week (Jan. 27-Feb. 2).

After encountering print censorship, FFRF is fighting back by placing prominent billboards all over Chicago, including a 20-by-60-foot sign on the Kennedy Expressway west of Montrose stating, “Value Children over Dogma: It’s Time to Leave the Catholic Church.” The powerful image depicts a small schoolgirl hiding her face. That message will go up in February for the entire month.

Additionally, starting today, Jan. 31, 11 digital billboards throughout the Chicago area will be flashing the message: “It’s Time to Leave the Church.” Those signs will stay up through Feb. 10.  Click to view billboard locations. See map below.

The ad in the Chicago Reader lists a series of real newspaper headlines about the ongoing revelations of massive priestly abuse of children and the subsequent Church cover-up, urging readers to stop supporting the world’s largest and most powerful religious institution.

The suppression of FFRF’s ad by Chicago’s two dailies shows the power of the Catholic Church to intimidate its critics, maintains Annie Laurie Gaylor, FFRF co-president.

“The ‘look the other way’ deference the Church has continually demanded and received — from congregations, media, police and courts — is the very reason why so many horrific crimes against children have occurred and gone unreported and unprosecuted in the first place,” Gaylor says. “The Catholic Church remains a virtuoso in silencing not only its critics, but its hundreds of thousands of victims — including one Chicago-area victim seeking to spare future children similar abuse.”

Adds Tom Cara, volunteer director of FFRF Metropolitan Chicago Chapter, which helped oversee the ad campaign: “It is tragic when a major metropolitan’s two largest newspapers elect not to publish a public condemnation of an organization’s horrific crimes. Our ad is a plea for help from a victim, and it is being ignored in order to protect the offenders.”

The Freedom From Religion Foundation is a national freethought association dedicated to keeping state and church separate, with almost 32,000 members and several chapters all over the country, including nearly 1,000 members and its Metropolitan Chicago chapter in Illinois. 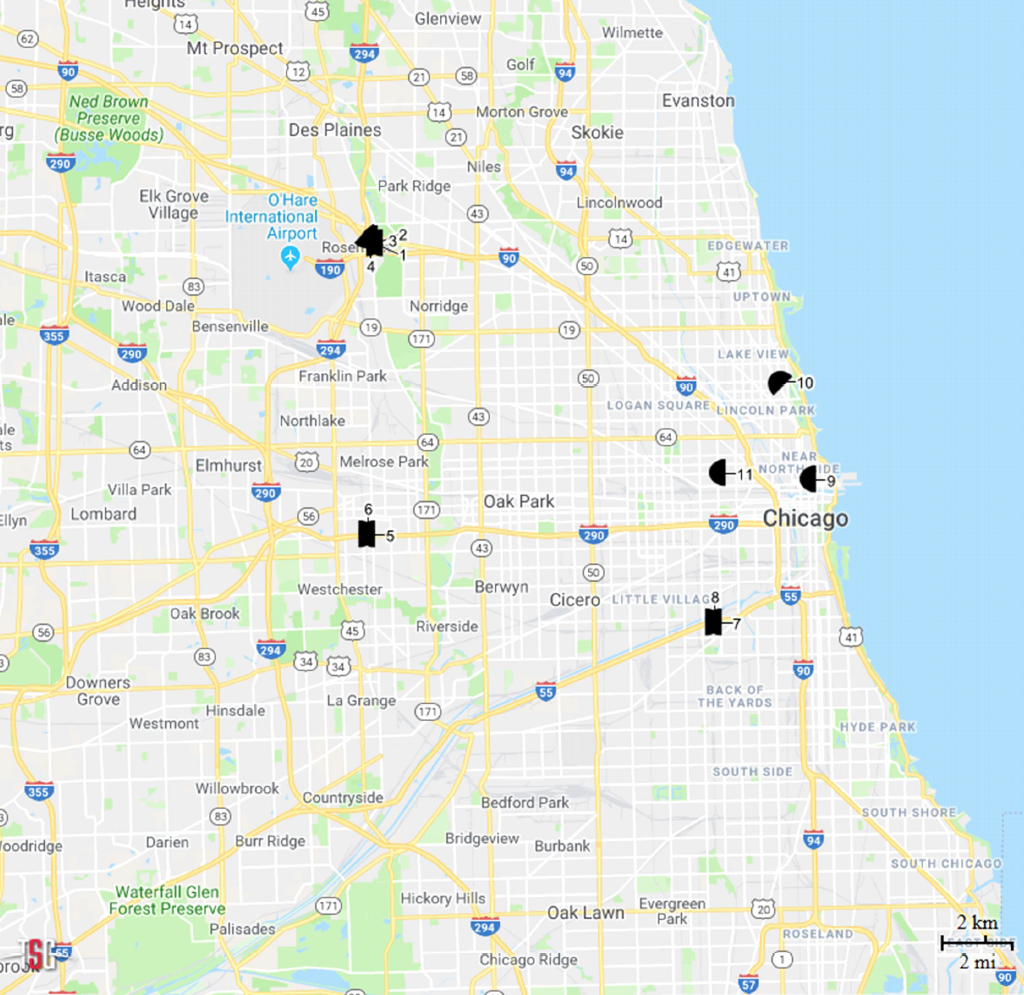