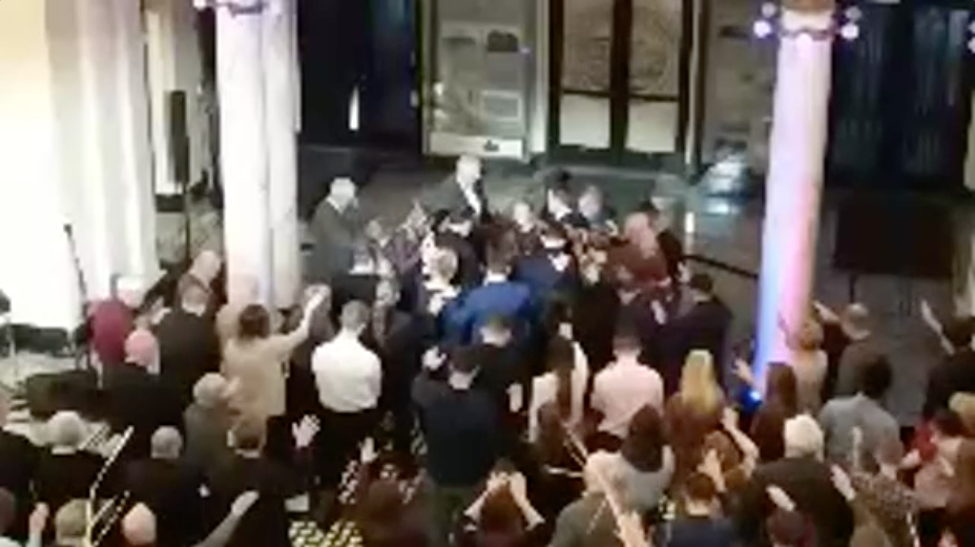 An over-the-top, government-sponsored religious service in the South Dakota Capitol is making the Freedom From Religion Foundation react in disbelief.

On Jan. 6 — her first full day as governor of South Dakota — Gov. Kristi Noem sponsored a church service in the Capitol rotunda. The event was billed as an “Inaugural Worship Service with Governor Noem,” explicitly tying this religious event to her inauguration and public office. Despite assurances that “all [were] welcome,” this event made no attempt at being an “interfaith” service; every aspect was decidedly Christian in nature.

The service featured Christian music, a full sermon by a pastor, and multiple group prayers. One of these prayers, led by a woman who identified herself as the new governor’s family friend, endorsed a Christian nationalist vision for South Dakota, saying of God: “You are the Lord and King of South Dakota” and “We thank you, Lord God, that we have faith — faith in You. And that Holy Spirit is filling this place now as we worship you, and the Holy Spirit absolutely takes over every corner and every crevice of this Capitol and of this state.” The woman then pivoted from Christian nationalism to exorcism, praying that “any demon that may try to come in this place is kicked out.”

As governor, Noem represent a diverse population that consists of not only Christians, but also atheists, agnostics, Jews, Muslims, Hindus, Wiccans — in short, people of all beliefs and backgrounds, FFRF stresses. This worship service summarily excluded the nearly 30 percent of U.S. adults and the over one-in-five South Dakotans who are not Christian. The nonreligious are the fastest-growing segment of the U.S. population by religious identification, now making up 24 percent of Americans, and 38 percent of younger Americans.

“We hope that you can see how your endorsement of an event at which attendees were asked to pray that ‘the Holy Spirit absolutely takes over every corner and every crevice of this Capitol and this state’ sent an unmistakable message to all nonreligious South Dakotans ‘that they are outsiders, not full members of the political community,’” FFRF Legal Fellow Colin McNamara writes to the governor, quoting the U.S. Supreme Court. “We urge you to focus on the secular business of governing, and leave church services where they belong — in a church.”

At her inauguration, Noem took an oath of office to uphold the U.S. Constitution, a secular document in which the only references to religion in government are exclusionary, such as the prohibition on religious tests for public office, FFRF reminds Noem. The use of her official position to promote her personal religion directly contravenes this oath. The Supreme Court and lower federal courts have said time and again that the First Amendment “mandates governmental neutrality between religion and religion, and between religion and nonreligion.”

“Noem is off to a bad start as the steward of the state of South Dakota,” says FFRF Co-President Annie Laurie Gaylor. “She needs to now reassure South Dakotans that her administration will not be sectarian Christian in nature, and that she understands that she has been elected to a secular post, not as a preacher-in-chief.”

The Freedom From Religion Foundation is a national nonprofit organization with 31,000 members across the country, including in South Dakota. Its purposes are to protect the constitutional separation between state and church, and to educate the public about matters relating to nontheism.