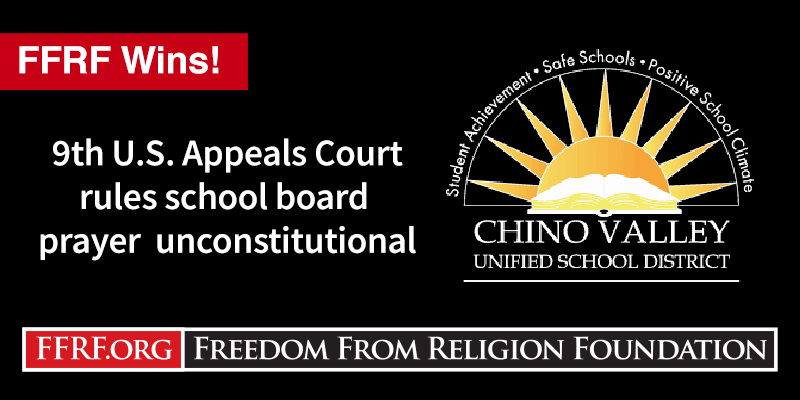 The praying, proselytizing and bible-reading school board in Chino Valley (Calif.) voted to respect the First Amendment and minority rights by not appealing a major Freedom From Religion Foundation victory to the U.S. Supreme Court.

FFRF, with 22 local parents, students and employees of the Chino Valley School District, triumphed in July before the 9th U.S. Circuit Court of Appeals (the largest in the country) against prayer at Chino Valley School Board meetings. These meetings, which resembled church revivals more than public gatherings, opened with prayer and regularly included board members reading from the bible and proselytizing. “The board’s prayer policy and practice violate the Establishment Clause,” a three-judge panel of the 9th Circuit had ruled unanimously. The appeals court reaffirmed FFRF’s victory last month by denying a petition to rehear the case.

The Chino Valley School Board, on Thursday, Jan. 17, voted 3-2 not to further appeal the case to the U.S. Supreme Court. FFRF welcomes the new board’s display of good sense. (The composition of the board changed in elections last November.)

The display of sectarian religiosity at board meetings was brazen. Then-Board President James Na injected Christianity into many of his official statements to parents and students at meetings. For instance, at one such meeting, Na “urged everyone who does not know Jesus Christ to go and find Him,” after which another board member closed with a reading of Psalm 143.

“These prayers typically take place before groups of schoolchildren whose attendance is not truly voluntary and whose relationship to school district officials, including the board, is not one of full parity,” the appeals court had ruled.

U.S. District Judge Jesus Bernal had initially decided in FFRF’s favor on Feb. 18, 2016, finding that “permitting religious prayer in board meetings, and the policy and custom of reciting prayers, Bible readings, and proselytizing at board meetings, constitute unconstitutional government endorsements of religion in violation of plaintiffs’ First Amendment rights.”

The previous school board, pressured by a local megachurch to which three members had belonged, had voted 3-2 to appeal the decision. The three-judge panel of the 9th Circuit was not impressed: “The prayers frequently advanced religion in general and Christianity in particular.” And in an acknowledgment of the presence of nonbelievers in California, the court also emphasized how discriminatory the prayer practice was toward secular local residents.

“The purpose of respecting religious diversity, to the extent that it does not encompass nonreligious belief systems and their diversity, is itself constitutionally suspect,” it stated. “Atheists and agnostics comprise 4 percent and 5 percent of the California population, respectively. Neither the purpose of respecting religious diversity nor the means of doing so via prayer acknowledges or respects the beliefs of nonreligious citizens in the district.”

Bernal had ordered the school board to pay more than $200,000 for the initial case. Costs and fees associated with the appeal ran to $75,000 for a total of more than a quarter million dollars.

The Freedom From Religion Foundation is a national state/church watchdog organization that has 31,000 nonreligious members and several chapters all over the country, including almost 4,000 members and a chapter in California.