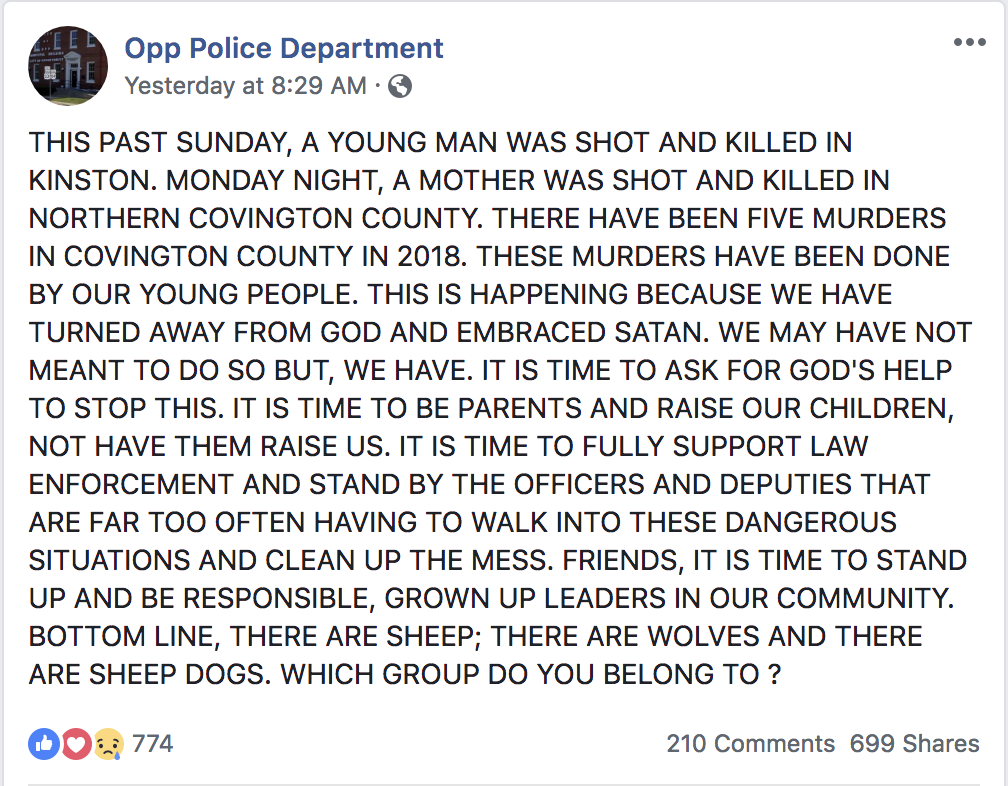 Who is policing the police? The Freedom From Religion Foundation, that’s who! The state/church watchdog is calling out the police department in the City of Opp, Ala. for blatant, illegal religious promotion on its Facebook page.

The Opp Police Department posted an announcement to social media yesterday (Dec. 18) that reports two murders, then blames nonbelief and Satanists for a rise in violent crime in the area.

The department says that the recent murders are “HAPPENING BECAUSE WE HAVE TURNED AWAY FROM GOD AND EMBRACED SATAN. WE MAY HAVE NOT MEANT TO DO SO BUT, WE HAVE. IT IS TIME TO ASK FOR GOD’S HELP TO STOP THIS.”

FFRF points out that it is highly illegal for a government entity, such as a police department, to endorse or deride religious belief. The Opp Police Department’s post does both, urging readers to “ask for God’s help” while blaming those who have “turned away from God” and “embraced Satan” for a rise in violent crime.

Comments FFRF Associate Counsel Sam Grover: “The department has very directly endorsed one religious ideology to the exclusion of minority religions and atheism, and decried Satanism. Neither message is permissible.”

FFRF’s letter challenges the police department’s faulty assumptions and stereotypes regarding atheists. “It is negligent for the department to spread a message of prejudice against those who choose not to believe in or worship a god. The department certainly has no data to support its theory that a rise in violent crime is caused by those choosing to turn away from god belief. Numerous scientific studies prove otherwise.”

The letter catalogues a series of social benefits correlated with areas of the United States that are less religious, citing psychology and sociology studies. One such study explicitly counters the police department’s assertion that violent crime is on the rise because people have “turned away from God.” The study shows that the states with the highest murder rates, including Alabama, tend to be highly religious, but the states with the lowest murder rates tend to be among the least religious in the country, such as Vermont and Oregon.

“It is the height of hypocrisy to call for a reduction in crime through an act that itself breaks the law,” FFRF contends.

FFRF is asking that the police department retract the portion of its post that decries nonbelief (and Satanism) while promoting god belief.

“Police officers take an oath to protect and serve all citizens, including those who practice a minority religion or no religion at all,” says FFRF Co-President Annie Laurie Gaylor. “This inappropriate post sends a chilling message to non-Christians and non-believers that they are presumed guilty.”

The Freedom From Religion Foundation is a national nonprofit organization with 32,000 members across the country and in every state, including Alabama. FFRF’s purposes are to protect the constitutional principle of separation between church and state, and to educate the public on matters relating to nontheism.