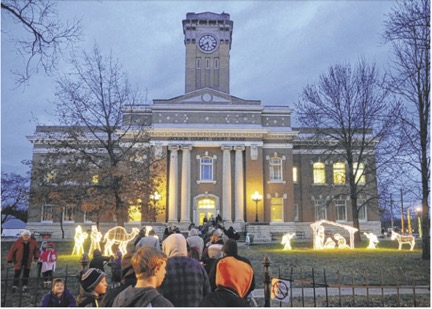 The Freedom From Religion Foundation is requesting that a county-sponsored nativity scene in Indiana be removed immediately.

A concerned local resident has contacted FFRF to report that the front lawn of the Jackson County Courthouse in Brownstown is decorated with a prominent, life-sized light display depicting a Christian nativity scene, including Mary, Joseph, baby Jesus, heralding angels, and magi bearing gifts. The display spans both sides of the courthouse’s front lawn, and there are no other visible holiday decorations.

It is unlawful for the county to maintain, erect or host a holiday display that consists solely of a nativity scene, thus singling out, showing preference for and endorsing one religion, FFRF reminds the county.

“The Supreme Court has ruled it is impermissible to place a nativity scene as the sole focus of a display on government property,” FFRF Staff Attorney Ryan Jayne writes to Jackson County commissioners. “In Allegheny v. ACLU, the Supreme Court held that a county government’s crèche displayed on the staircase of the county courthouse was an unconstitutional endorsement of religion. The court further determined that the placement of the crèche on the grand staircase of the county courthouse contributed to its illegality because ‘no viewer could reasonably think it occupies this location without support and approval of the government.’”

It is irrefutable that the crèche is a Christian symbol, FFRF asserts. Displaying an inherently Christian message unmistakably sends the message that Jackson County endorses the religious beliefs embodied in the display. When the county displays this manger scene, which celebrates the legendary birth of Jesus Christ, it signals the government’s approval of Christianity, thereby excluding the 30 percent of Americans who are not Christian, including the 24 percent who are nonreligious. Putting up a nativity scene sends an unwelcoming message to these nonbelievers and non-Christians that they are outsiders in their own community.

There are ample private and church grounds where religious displays may be freely placed, FFRF maintains. Once the government enters into the religion business, conferring endorsement and preference for one religion over others, it strikes a blow at religious liberty, forcing taxpayers of all faiths and of no religion to support a particular expression of worship.

“Holiday season or no holiday season, a governmental entity has no business endorsing the majority creed,” says FFRF Co-President Annie Laurie Gaylor. “It is unconstitutional — and divisive to boot.”

The Freedom From Religion Foundation is a national nonprofit organization with 32,000 members across the country, including 450 in Indiana. FFRF’s purposes are to protect the constitutional principle of separation between state and church, and to educate the public on matters relating to nontheism.