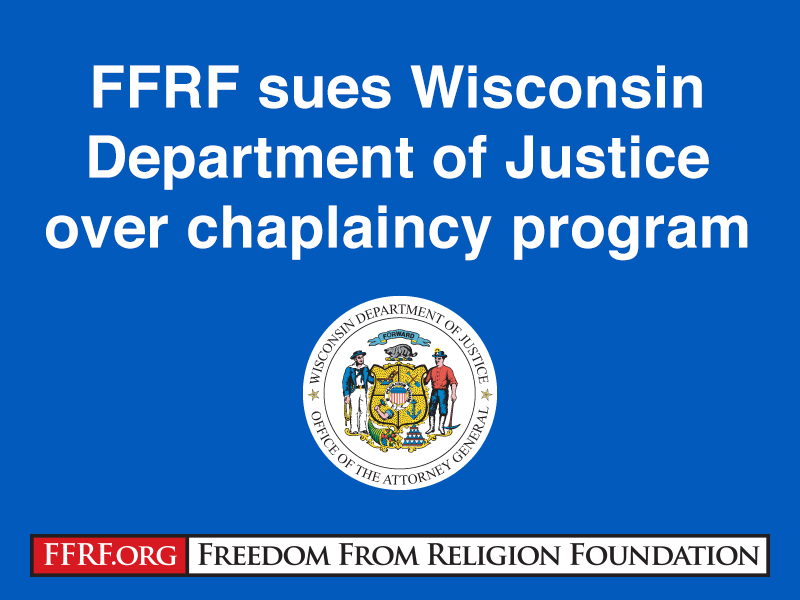 In a lawsuit filed today in a Dane County court, FFRF is challenging the constitutionality of a faith-based employee chaplaincy that Wisconsin Attorney General Brad Schimel created at the state Department of Justice.

Schimel, who was defeated in his bid for re-election on Nov. 6, announced the chaplaincy program in mid-October while campaigning. The program became effective on Oct. 4 but had been in the works for at least a year.

Schimel claims that the chaplaincy program is a “critical component” of the DOJ, and has urged other state agencies to contact the DOJ staff to start their own chaplaincy programs. Six all-white men from Christian faiths, many conservative, have been formally appointed DOJ chaplains. Although unpaid, the six agency chaplains are under the direction of a paid DOJ chaplaincy program coordinator and have received training and reimbursement at taxpayer expense. They’re issued DOJ identification and building access cards and are not prohibited from soliciting donations or proselytizing employees. Their explicit duties include providing consultation and spiritual guidance to DOJ employees and their families, and the chaplaincies are integrated into DOJ programs, including new employee classes and orientation.

FFRF points out that DOJ employees are not in any way inhibited by their employment from freely exercising any religious preference they may have for religious counseling services. State employees, including nonreligious and non-Christian employees, are being encouraged to seek out Christian counseling, while being denied secular counseling services by bona fide mental health practitioners. FFRF alleges there could be life-and-death consequences due to the fact that the agency chaplains aren’t required to have necessary mental health/substance abuse training.

“There’s absolutely no need or justification for the DOJ to provide religious counseling as an accommodation, such as can be argued that the military is obliged to offer,” adds Gaylor. “This is pure and simple a case of governmental promotion of religion to state employees, and it’s not only unnecessary, it also violates both the Wisconsin and U.S. Constitutions.”

FFRF is asking the circuit court to declare the program a violation of Wisconsin State Constitution, Article 1, Section 18, and of the Establishment Clause of the First Amendment of the U.S. Constitution, and to enjoin the DOJ from providing chaplaincy services.

The plaintiffs are FFRF, a Wisconsin-based national group of 32,000 members on behalf of its 1,400 Wisconsin members, and Annie Laurie Gaylor and Dan Barker, FFRF’s co-presidents, in their capacity as state taxpayers and as FFRF lifetime members.

The case has been filed in the courtroom of Dane County Circuit Court Judge Josann Reynolds. Case No. is 2018cv3022.