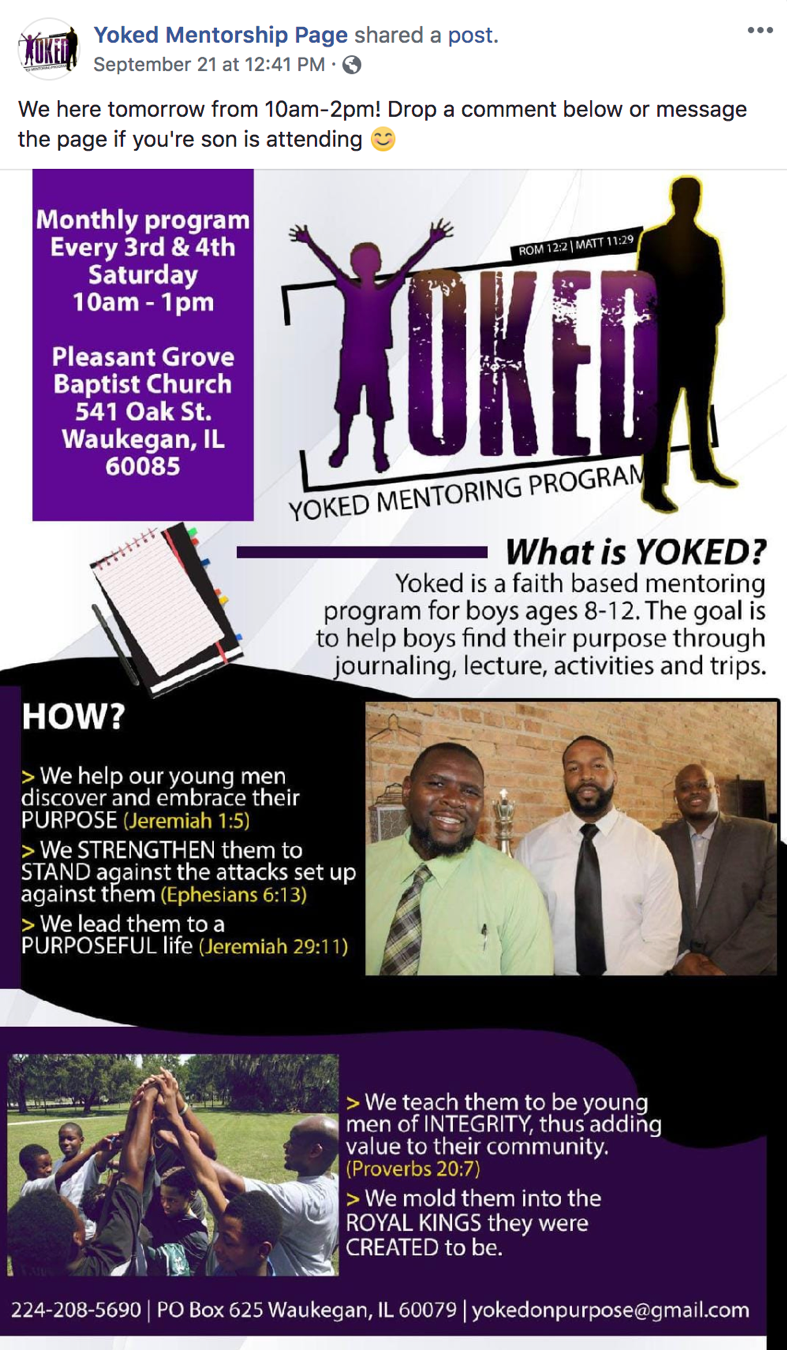 The Freedom From Religion Foundation is appalled that an Illinois school district has allowed its schools to be used as a recruiting ground for a religious ministry.

The Yoked Mentoring Program is openly religious in nature. A flier for the program, posted on the group’s Facebook page states that “Yoked is a faith-based mentoring program” and includes six biblical citations.

FFRF understands that these two middle schools allowed representatives of the Yoked ministry to promote their program to students during school-sponsored events. Facebook posts show the group publicizing their visits to the schools, including during a back-to-school event at Miguel Juarez where the school appears to have allowed the ministries to erect a table with literature and representatives to sign students up for the faith-based mentorship program.

It is well-established law that public schools may not advance or promote religion. Allowing ministry representatives access during school-sponsored events to recruit students for religious activities is a violation of the Establishment Clause, FFRF reminds Waukegan Community Unit School District #60.

“The district cannot allow non-school persons to treat schools as a recruiting ground for their religious mission,” FFRF Staff Attorney Ryan Jayne states in his letter to the district’s counsel. “When a school connects its students with one particular group of faith-based mentors, it has unconstitutionally entangled itself with a religious message — in this case, a Christian message.”

FFRF is requesting that the district discontinue its partnership with the Yoked Mentoring Program and the Plan, Purpose and Promises Mentoring Program. Since these ministries do not offer any secular (non-faith-based) programs, it is inappropriate for the district to promote them in any way.

“The district has no business allowing faith leaders access to recruit and proselytize to public school students,” says FFRF Co-President Annie Laurie Gaylor. “It is a serious violation of the rights of both the students’ and the parents’ rights of conscience.”

FFRF is a national nonprofit organization with more than 32,000 members and several chapters across the country, including over 900 members in Illinois and a chapter in Chicago. FFRF’s purposes are to protect the constitutional principle of separation between church and state, and to educate the public on matters relating to nontheism.