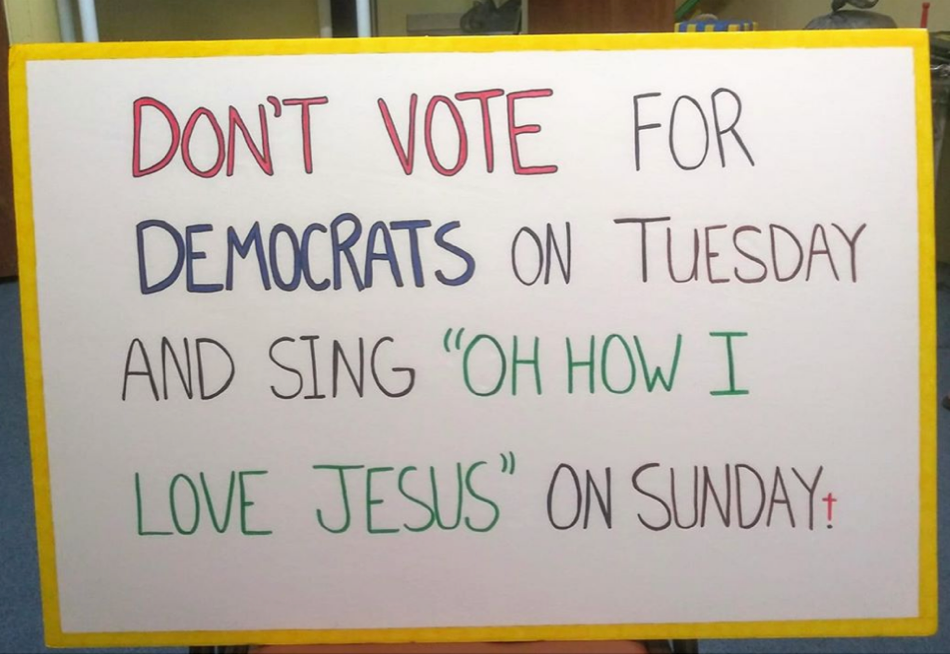 The Freedom From Religion Foundation is raising the alarm over a Florida church’s blatant electioneering yesterday.

FFRF has learned that on Election Day, Grace of God Church, which serves as a Pasco County polling location in New Port Richey. Fla., posted a political sign on its property. The placard was planted on church property 100 feet away from where ballots were cast and read, “DON’T VOTE FOR DEMOCRATS ON TUESDAY AND SING ‘OH HOW I LOVE JESUS’ ON SUNDAY,” followed by an exclamation point drawn out of a cross. The Pasco County Supervisor of Elections Brian Corley asked church Pastor Al Carlisle to remove the sign. Carlisle admitted he had put it there, but he refused to remove it. The Church of God posted the sign on its Facebook page. In response to suggestions that it had violated Section 501(c)(3) of the tax code, the church indicated it was willing to “risk losing our 501-3C and honor our sacred rights to free speech.”

Carlisle was upfront about his political motivations.

He “criticized Democrats in favor of open borders, saying they oppose Christian values in the bible, which he said explains that God established borders for the Garden of Eden,” reports the Tampa Bay Times. “If people are offended by his sign, Carlisle said, they have a problem, not him. And their problem is with God.”

IRS regulations specify that 501(c)(3) organizations, which include churches and other religious organizations, are prohibited from “[participating in or intervening in] … any political campaign on behalf of (or in opposition to) any candidate for public office,” FFRF reminds the Internal Revenue Service.

“By permitting signs opposing political candidates to be erected on its property, particularly on Election Day while serving as a polling location, the church appears to have inappropriately used its religious organization to participate in a political campaign,” FFRF Associate Counsel Elizabeth Cavell writes to the tax authorities. “It violated IRS regulations, apparently with full knowledge and disregard of its obligations under the tax code, by expressing opposition to a group of candidates for political office. Given these partisan activities, Grace of God Church violated the 501(c)(3) tax-exempt rules, which prohibit electioneering.”

FFRF is asking the IRS to commence an immediate investigation of the Grace of God Church and take appropriate action to remedy any violations of 501(c)(3) regulations.

“Churches are granted special tax-exempt status with the understanding that they won’t meddle in the political process,” says FFRF Co-President Annie Laurie Gaylor. “If such violations are allowed, the sanctity of our electoral system stands jeopardized.”

The state/church watchdog is also commending Pasco County election officials for announcing that they will look for an alternative polling place to the church the next time around.

The Freedom From Religion Foundation is a nationwide nonprofit with more than 32,000 members which works to protect the constitutional separation of church and state and to educate the public on matters related to nontheism.