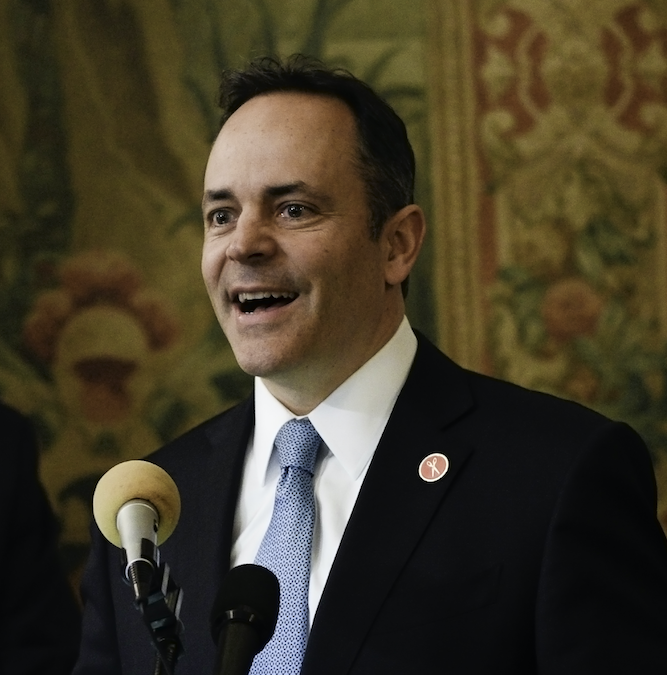 The Freedom From Religion Foundation has sent the Kentucky governor a missive chiding him for imposing his biblical (im)morality on his state.

Gov. Matt Bevin recently posted a video message on his official Twitter feed encouraging all students in Kentucky to participate in “Bring Your Bible to School Day” on Oct. 4. The day is a pet project of the religious fundamentalists at Focus on the Family. The organization makes clear that the real purpose behind the day is evangelism: “The event is designed to empower you as a student to express your belief in the truth of God’s Word – and to do so in a respectful way that demonstrates the love of Christ.”

It is a fundamental principle of the U.S. Constitution that our government cannot in any way promote, advance, or otherwise endorse religion, FFRF Co-President Dan Barker and Annie Laurie Gaylor remind the governor in the letter. Likewise, the Constitution of the Commonwealth of Kentucky, which he took an oath to uphold, guarantees: “No preference shall ever be given by law to any religious sect, society or denomination; nor to any particular creed, mode of worship or system of ecclesiastical polity.”

The freedom of conscience enshrined in the First Amendment and the Kentucky Constitution means that the government has no business telling citizens which god — if any — to believe in, or which holy book to read and propagate. FFRF asks Bevin to imagine the uproar had he encouraged the schoolchildren of Kentucky to bring their Qurans to school and tell everyone all about Allah and the Prophet Muhammad.

In promoting this contrived day of evangelism, Bevin recited a litany of Christian Nationalist talking points, saying: “The bible is an amazing document. It has an incredible amount of history, knowledge, wisdom, guidance — things our Founders understood and took to heart as they set this entire nation in motion.”

Contrary to Bevin’s notions, the United States of America was actually founded on the radical new ideas of the Enlightenment, not the antiquated orthodoxy of the bible. “Our Founders rejected divine tyranny and instead set out on a grand experiment in self-government and self-determination that necessarily required the severance of the church from the state,” Barker and Gaylor declare.

Bevin also misinforms citizens about “how our Founding Fathers used biblical principles to draft the Declaration of Independence, the Constitution, [and] the Bill of Rights.” Our nation is founded not on Christian doctrine, but on our secular and godless Constitution whose only references to religion are exclusionary. The Declaration of Independence is based on the idea that “governments are instituted among men, deriving their just powers from the consent of the governed” and does not contain a single mention of “God,” “Jesus,” or “biblical principles” anywhere. And the myriad ways in which the principles of fairness, equal justice, and the rule of law encapsulated in our Bill of Rights contradict “biblical principles” are far too numerous to list here.

The Founders understood that a government free from religion is the only guarantor of religious freedom for all. The abuse of Bevin’s government position to endorse the bible shows a clear lack of understanding of this bedrock principle of American government. The governor of Kentucky needs to heed the words of one of its most celebrated sons, Sen. Henry Clay: “All religions united with government are more or less inimical to liberty. All, separated from government, are compatible with liberty.”

The Freedom From Religion Foundation has more than 32,000 members and several chapters around the country, including members in Kentucky and a Kentucky chapter. FFRF defends the constitutional separation between state and church and educates the public on matters relating to nontheism.

Photo Via Shutterstock By Patrick Delahanty