FFRF urges Atlanta to get out the secular vote

The Freedom From Religion Foundation is urging Atlanta-area freethinkers to get out and vote this fall like their rights depend on it – because they do.

Rotating digital billboards feature several young atheists with the message “I’m an atheist and I vote,” on Pleasant Hill near the intersection of Satellite Blvd. in Duluth, Ga., the most populated county in metro Atlanta.

Additionally, a 14-by-48 foot bulletin billboard saying “Supernatural belief - the enemy of humanity” is going up this week in Atlanta, just outside Emory University campus, in North Druid Hills south of Spring Creek Road. These messages will be up through the end of September.

As anticipation grows for November’s mid-term elections, these billboards serve as timely reminders of the importance of getting out to vote and holding your elected officials accountable to making reason-based policy decisions.

“The best way to fight back and protect civil liberties is through the ballot,” FFRF Co-President Annie Laurie Gaylor says. “The secular vote has never been more critical.”

The fast-changing demographics of U.S. society make our secular setup even more essential, FFRF maintains. Current Pew surveys reveal that a quarter of adult citizens and more than a third of Millennials qualify as “None,” either specifying atheism, agnosticism or no religion. Since 1990, the number of Americans with no religion has nearly tripled, from about 8 percent to 23 percent. With this trend projected to continue, “Generation Z” is primed to be the least religious generation yet, with about one-fifth claiming to be explicitly atheist or agnostic. There are now more “Nones” than Catholics, and by 2035, the Nones are projected to outnumber Protestants.

The billboards will be on display for a month as part of a year-long media campaign in the South’s most bustling metropolis. Georgia FFRF member Jack Egger is funding the campaign, for which FFRF is truly grateful. Previous billboards that FFRF and Egger have placed this year in the vicinity include a bulletin telling people to “Enjoy life – there is no afterlife,” a timely billboard reminding resident of our nation’s foundational wall with the message “The Only Wall We Need Is Between Church-State,” and a provocative message proclaiming: “Supernatural belief – the enemy of humanity.”

The Freedom From Religion Foundation and its membership work to promote the viewpoint of freethinkers, including atheists and agnostics, and to protect the constitutional principle of separation between religion and government. FFRF has roughly 32,000 members and several chapters all over the country, including 500-plus and an Atlanta chapter in Georgia. 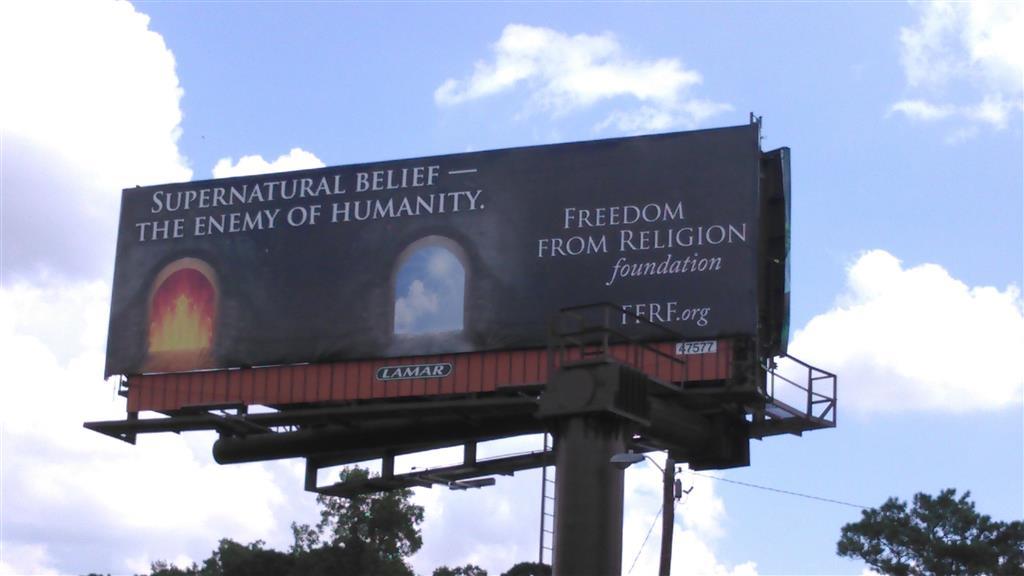