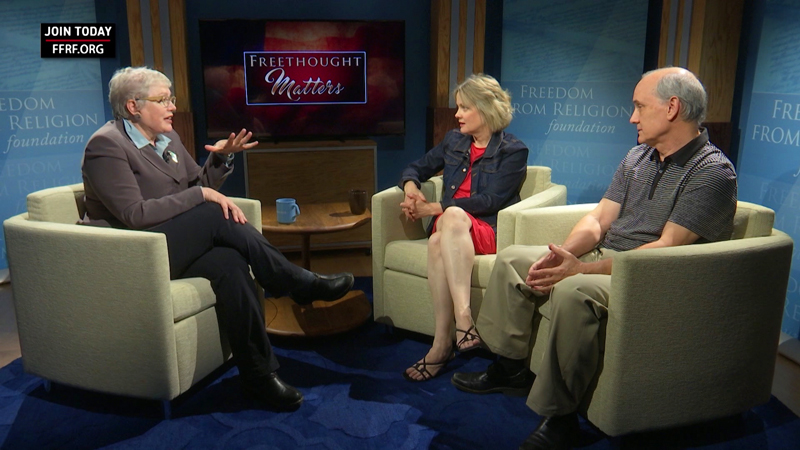 The Freedom From Religion Foundation’s new weekly TV show, “Freethought Matters,” begins airing this Sunday in eight major cities, plus Madison, Wis., covering more than 22 percent of the United States TV market. The show will start broadcasting Sunday, Sept. 2, for 26 weeks, including in four of the top 10 markets.

As an antidote to religion on the airwaves and Sunday morning sermonizing, the half-hour talk show will air Sunday mornings in eight cities.

“You can turn on the TV and be preached at 24/7, especially on Sunday mornings,” says FFRF co-founder Annie Laurie Gaylor. Gaylor and her husband, Dan Barker, a former evangelical minister and well-known atheist author, are FFRF co-presidents and typically co-host the program.

“We not only want to provide sympathetic programming for the ‘unmassed masses,’ but offer an alternative, so that religious programming does not win by default,” adds Barker.

The intent is to introduce communities to leading freethought authors, thinkers and activists. Today, the nonreligious is the largest “denomination,” surpassing Roman Catholics, at almost 24 percent of the adult population. A third of Millennials are “Nones” and a fifth of Gen Z explicitly identifies as atheist or agnostic.

In addition to returning to the Madison market, at 11 p.m. Sundays on WISC-TV 3000, where it began airing last spring, “Freethought Matters,” targeting cities with high nonreligious populations, will run in:

FFRF is the nation’s largest association of freethinkers (atheists and agnostics), with 32,000 members nationwide. FFRF also works as a watchdog guarding the constitutional separation between religion and government.

The show is produced by FFRF’s videographer Bruce Johnson, a veteran of many years in public television. Crew includes staff members Monica Schwartz, Kristina Daleiden, Lauryn Seering and Chris Line, plus various floor managers, with sound production provided by Audio for the Arts.