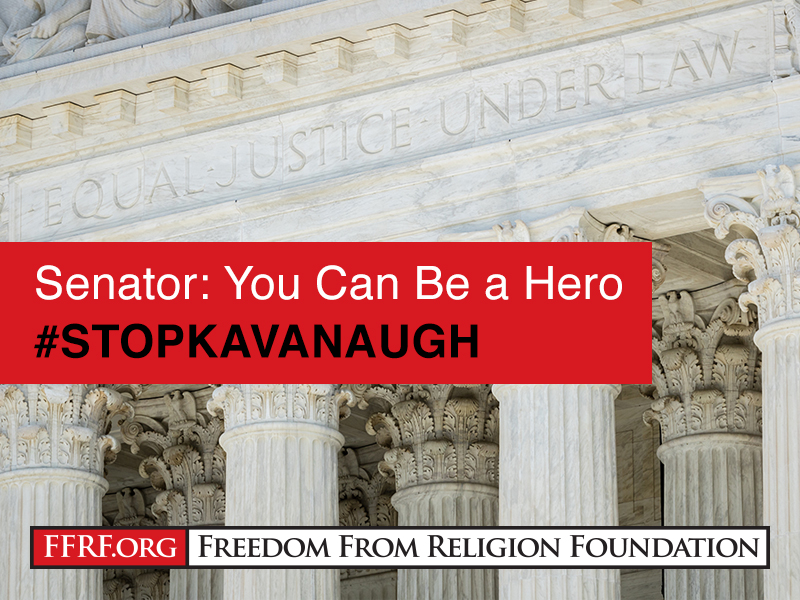 In a desperate rush to push through an unvetted nominee before a contentious election, the Senate Judiciary Committee has scheduled a hearing for Supreme Court nominee Brett Kavanaugh in three weeks, on September 4.

As the Freedom From Religion Foundation has detailed, Kavanaugh will be a disaster for state-church separation, taking the place of relative moderate Anthony Kennedy and tilting the court toward religious favoritism for the foreseeable future.

Every American who values the First Amendment, religious freedom, and the separation of state and church should call their senators — (202) 224-3121 — to oppose Kavanaugh’s nomination.

A wrecking ball aimed at the wall.
Kavanaugh would tear down Thomas Jefferson’s “wall of separation between church and state.” He’s all but said so, praising judges who “persuasively criticized” Jefferson’s metaphor of a strict “wall of separation between church and state.” Jefferson’s metaphor explains the meaning of the Establishment Clause, for which he drafted the legislative precursor. Although that metaphor has been adopted by the Supreme Court since 1878, Kavanaugh charges it is “based on bad history,” is “useless as a guide to judging,” and, most alarmingly, is “wrong as a matter of law and history.”

If Kavanaugh has his way, prayers will be broadcast over loudspeakers in public schools, taxpayer money will flow directly to churches and religious schools, secular Americans will be marginalized, religious minorities will be second-class citizens, and Christians will be privileged above all. For Kavanaugh, “history and tradition” justify any violation of of the constitutional principle of separation between state and church.

No records, no hearing, no vote.
The purpose of Senate Judiciary Committee hearings is to vet any nominee. But Kavanaugh’s hearing has been scheduled despite the fact that hundreds of thousands of his records are still being concealed. It is premature to schedule that hearing before the disclosure of these records. Every other recent Supreme Court nominee has had all their government service records disclosed and fully vetted prior to their confirmation hearings. Senate Judiciary Chair Chuck Grassley and Kavanaugh’s supporters are trying to dodge this requirement.

That’s because Kavanaugh may have misled the Senate when he was confirmed to the D.C. Circuit in 2006. Senator Leahy wrote about this in a New York Times op-ed: “Senator Dick Durbin and I asked about his knowledge of several Bush-era scandals, including warrantless wiretapping, torture and detainee treatment. Judge Kavanaugh testified that he had no knowledge of such issues until he read about them in the newspaper. But a year after his confirmation, press reports indicated that he had participated in a heated discussion in the White House over the legality of detainee policies.”

If a judicial nominee lied to or misled the Senate in a prior confirmation hearing, that’s a national scandal. It’s vital to take the time to determine whether there is any truth to the matter, if only to give a new justice a clean slate.

It is shocking that the Senate would even consider someone for a lifetime appointment to our highest court without fully vetting that individual. There is no legitimate reason to rush a Supreme Court nominee through. The Court limped along with eight justices for more than a year when the Senate refused to give Merrick Garland, President Obama’s nominee to replace Antonin Scalia, a hearing.