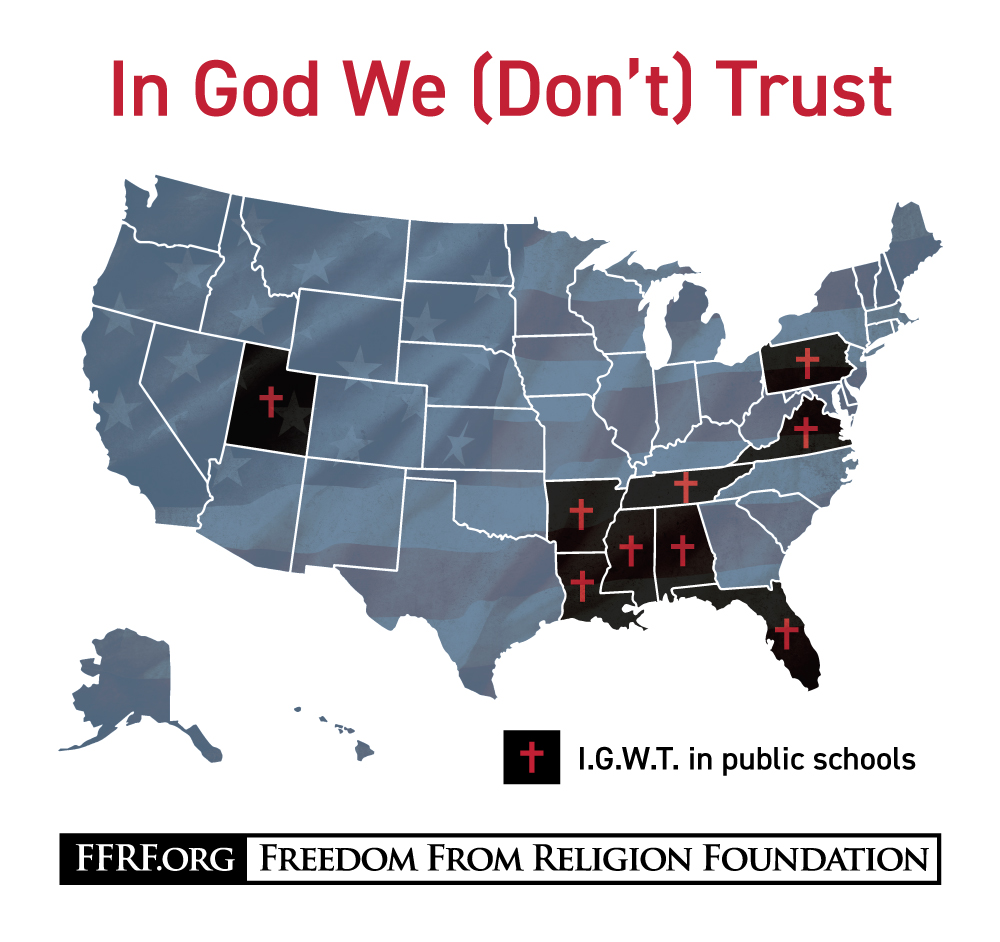 The Freedom From Religion Foundation is warning that at least nine state legislatures are promoting or even forcing display of a religious motto in public schools. As a captive audience of young, impressionable students return to classes for the new fall term, they may be greeted with signs, posters or other displays that proclaim “In God We Trust.”

In Florida, Rep. Kim Daniels, a Democratic legislator who runs a side ministry and speaks to demons (including demons whom she claimed looked like “Predator from the movie Predator”) sneaked the mandatory display requirement into an educational spending bill this spring. This was the cop-out legislation the state House of Representatives insultingly passed in the wake of the shooting massacre at Marjory Stoneman Douglas High School, while at the same time snubbing Parkland students seeking real reform.

In Arkansas, State Senator Jason Rapert, who also runs a side ministry and who was responsible for the Ten Commandments monument that FFRF is challenging in federal court, rammed through a bill last year requiring that a poster proclaiming “In God We Trust” must be displayed in public schools and government-owned buildings.

In Tennessee, a law was adopted this March requiring Tennessee schools to “prominently display” the pious national motto. One of the state reps who voted for the bill, Terri Lynn Weaver, “explained” that displaying the motto “will help future generations of students better understand the importance of faith and remind them that the very bedrock of our nation was built on the principles of the God of the Bible.”

In Alabama, a law took effect June 1 encouraging the voluntary posting of the national motto in classrooms, courthouses, office buildings, libraries and on law enforcement and service vehicles.

In Louisiana, public schools will be required to display “In God We Trust” on their buildings by August 2019, after passage of a mandatory posting law in May. State Sen. Regina Barrow argued it would help address “moral decay” in our public schools.

It’s no coincidence that many preachers-cum-legislators are proposing these bills and that the proponents are professing religious purposes. These laws are not intended to showcase the national motto or inspire patriotism. They are the thin edge of a Christian nationalist wedge, the proverbial camel’s nose under the tent.

This is no secret. Several Christian nationalist groups, including the Congressional Prayer Caucus Foundation and Wallbuilders (a propaganda outfit run by the notorious David Barton), have banded together to push for a number of state bills promoting religion under the ominous germanic moniker, “Project Blitz.”

The overarching goal of Project Blitz is to legislate Christianity, starting with seemingly more innocuous laws, such as the posting of the national motto, and progressing to laws that privilege the Christian majority, often by portraying it as a persecuted minority. Project Blitz is Christian nationalism masquerading as religious liberty. It’s a “legislative assault . . . meant to reshape America.” So far, we’ve seen more than 70 Project Blitz bills proposed in about 20 states.

(For the record, some of the “In God We Trust” posting laws predate Project Blitz. Mississippi’s law requiring mandatory posting of the religious motto was passed first, in 2001, as the result of the American Family Association pushing the most religious state in the country into using public schools to promote religion. Virginia, hard on Mississippi’s heels, passed its mandatory posting law the following year. Pennsylvania passed a law in 2016 to encourage posting of the motto, at the behest of pious sponsor Rick Saccone (whom FFRF sued over similar hijinks and who notably lost his bid for a House seat in a special election this year).

Regardless of which Christian Right outfit is behind any of these laws, the end goals are the same. These laws are about advancing the Big Lie that the United States was “founded on God” or Christianity, and dismantling the vaunted wall of separation between religion and government. The laws also promote the pernicious idea that piety is a prerequisite for being a good American.

The motto “In God We Trust” is inaccurate, exclusionary and aimed at brainwashing American schoolchildren into believing that our nation is a theocracy. “In God We Trust” was a johnny-come-lately, adopted as the national motto in 1956 at the height of the Red Scare. The original motto, “E Pluribus Unum” (From many [come] one), celebrating unity through diversity, was adopted by a committee of Jefferson, Adams and Franklin. The godly motto is nothing but a Cold War anachronism.

Barna, a religious polling outfit, recently found that 21% of younger Americans are either atheist or agnostic—not just nonreligious, but atheist or agnostic. As Anne Nicol Gaylor, FFRF’s principal founder, has always put it, “ ‘In God We Trust’ isn’t even accurate. In order to be accurate, it would have to say ‘In God Some of Us Trust,’ and wouldn’t that be silly?”

These godly postings exclude and alienate the one-in-five students in our public schools who do not believe in god. And they’re meant to. These laws are not about patriotism, they’re about turning believers into insiders, and nonbelievers into outsiders. There’s nothing patriotic in undermining our nation’s secular Constitution.

It’s hard to fight state laws mandating the posting of “In God We Trust” when attempts, including by FFRF, to legally challenge the words as our national motto have so far failed. FFRF is considering the best legal options for this rash of legislation. “In God We Trust” is a religious declaration, and therefore should not be placed on public property, much less in our public schools. Courts, including the Supreme Court, have held for more than 65 years that devotionals and religion in the public school setting violate the First Amendment.

FFRF is committed to fighting this nationalistic lie. Parents and students should contact their school board to oppose these displays. They should contact their legislators to ask them to repeal the laws or stand firmly against any new bills that might put “In God We Trust” in public schools. (FFRF has sent out many action alerts at the state level to our membership, making it easy to oppose such bills.) Most important, if students are alienated and impacted by these new displays, they should immediately contact FFRF’s legal department.