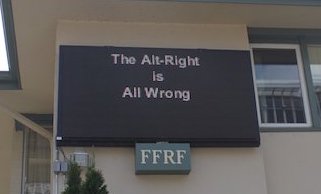 The Freedom From Religion Foundation strongly denounces the upcoming Aug. 12 “Unite The Right” rally in Washington, D.C. FFRF encourages its members and supporters in the area to attend a peaceful counter-protest as a message to hate-mongering white supremacists that their racist ideology will never unite the United States of America.

The Freedom From Religion Foundation office watched with horror and dismay as the march in Charlottesville, Va., last August ended in hours of violence, mayhem and three deaths. Our feelings turned to even greater revulsion and concern as the nation’s leader, charged with setting the moral tone in our country, shockingly stated that there were “fine people on both sides” and holding the “alt-left” equally culpable.

Unlike President Trump, the rest of us do not find it hard to condemn swastika-wielding neo-Nazis, white nationalists, neo-Confederates and anti-Semites, who espouse that the United States is “fundamentally a white man’s country.” This overt racism has roots in Christian nationalism, including the Ku Klux Klan.

David Duke, the former grand wizard of the KKK who spoke at the Charlottesville march last year and called it an effort to “take the country back” and “fulfill the promises of Donald Trump,” is a “born-again” Christian. The KKK is an explicitly Christian organization. Klansmen began burning crosses “to spread the light of Jesus into the countryside.” FFRF Co-President Dan Barker has catalogued the racist verses in the bible, including verses in which God himself is a slavemonger.

In today’s increasingly ugly and divisive climate, FFRF and freethinkers would indeed be culpable if we did not speak out against racist hate groups seeking to destroy our nation and and its core principles. FFRF unequivocally condemns white supremacist hate groups, racism, and the violence, hate, and discord they are unapologetically fomenting.

FFRF works to uphold constitutional principles, which include not only religious liberty, but revered principles of equality and equal justice under the law. We don’t believe in gods, but we do fervently believe in the “melting pot” of diverse peoples united together under the banner of our original, inclusive, de facto motto: E Pluribus Unum.