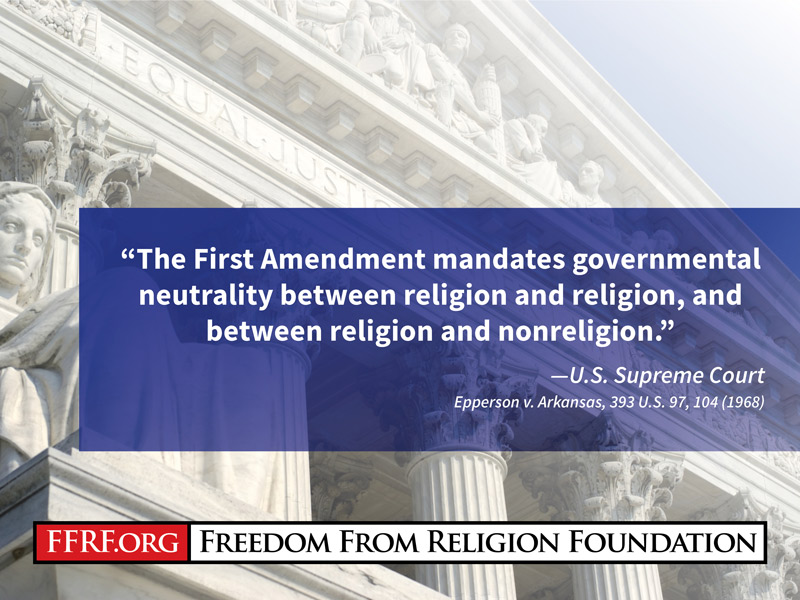 A national state/church watchdog has sent a complaint letter to Mobile County Public Schools, Ala., over a mandatory staff event that turned into a mandatory religious service.

Pastor Vint Norris from the Alabama District of the Assembly of God was invited to deliver what has been described as “a fire and brimstone invocation” at an August MCPS staff event. In response, the Freedom From Religion Foundation sent a letter asking the district to end scheduled prayer at all district meetings and events.

FFRF was made aware of this event by a concerned district employee who reported that Pastor Norris’ invocation was “not merely a prayer, it was a sermon,” reporting that several employees commented that “despite being devout, this made them uncomfortable.” Multiple MCPS employees also described the religious nature of the required staff assembly on Facebook.

“Today for the first time since I can remember MCPSS went to church and the church said AMEN!!” read another post. “God alive and working his way through MCPSS staff, not just teachers, but staff…”

The Constitution’s Establishment Clause, which ensures the continued separation of religion and government, mandates that the government may not in any way endorse religion. The First Amendment prohibits even the appearance of religious endorsement by government officials, FFRF noted. The occurrence of a religious sermon and the subsequent promotion of a specific set of religious values at a mandatory public school function violates these constitutional limits.

“While individuals are certainly free to pray or privately worship on their own time in their own way, calling upon MCPS employees to participate in prayer is coercive and beyond the scope of a secular employer,” writes Patrick O’Reiley FFRF Legal Fellow Christopher Line in an August 6 letter to the district.  “Such prayer creates acrimony, makes minorities feel like political outsiders in their own place of work, and show unconstitutional governmental preference for religion over nonreligion.”

FFRF is awaiting a response from MCPS’ attorney over a requested district plan to remedy the First Amendment violation and to ensure that the practice of prayer at district meeting and events will no longer occur.

“We’re turning up the heat, because such a prayer sends the worst possible lesson to teachers and principals about religious devotions in public schools,” said Annie Laurie Gaylor, FFRF co-president. “Staff need to protect the rights of conscience of students and uphold more than 65 years of Supreme Court precedent against divisive religion in our public schools.”

The Freedom From Religion Foundation is a national non-profit organization founded in 1978 with more than 32,000 members, including members in Alabama. FFRF’s purposes are to protect the separation between state and church, and to educate the public on matters related to nontheism.