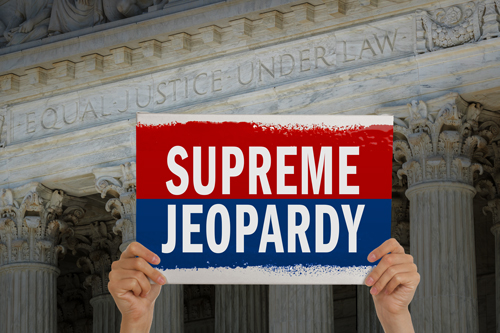 Although not unanticipated, the news today that Justice Anthony Kennedy is retiring from the U.S. Supreme Court is an ominous development for our civil liberties.

The opposition in Congress absolutely must do what it can to ensure that confirmation hearings and votes on Kennedy’s replacement are delayed until after the winners of the fall congressional election have been sworn in.

The Democrats have every reason to insist upon this. We all remember that phony and despicable phantom excuse that let the Federalist Society steal Merrick Garland’s place on the high court with one of its handpicked nominees, Neil Gorsuch. Within hours of Justice Antonin Scalia’s death in February 2016, Senate Majority Leader Mitch McConnell smugly announced no vacancies should be filled on the court until after the presidential election that November. Many news stories and opinion pieces were published yesterday pointing out how that stolen seat had made possible yesterday’s court vote affirming the Muslim travel ban, for instance.

It is reasonable to delay confirmation hearings with a crucial congressional election not even five months away.

There’s no sugarcoating the game-changing nature of Kennedy’s announcement. Even though Garland’s seat was stolen, Gorsuch technically was a right-winger replacing a right-winger. Kennedy was a swing vote. As the Duke Ellington song goes, “It don’t mean a thing if you ain’t got that swing.” Kennedy was often a disappointment, but his vote really counted when it counted. To give Kennedy his due, he has stood up for secularism in at least four major opinions, although more often voting against strict state/church separation. He even authorized some landmark civil rights cases, including the 1992 Weisman decision evicting commencement prayers and the clergy who gave them from public high schools, and the Obergefell verdict approving marriage equality in 2015. (Notably, Kennedy did not swing in our direction when FFRF’s Hein decision was before the court in 2007.)

The Associated Press reports that President Trump has a list of 25 candidates (24 judges plus Utah Sen. Mike Lee), which includes the worst of the worst. There is no question that Kennedy’s replacement, handpicked from this list put together by the arch-reactionary Federalist Society and Heritage Foundation, will mean the beginning of the end for many U.S. civil liberties.

Although Kennedy’s record in keeping state and church separate has been spotty at best, replacing him with another Neil Gorsuch will lead to 5-4 decisions with majority opinions that are far more emphatically hostile to secularism and true religious freedom. We will go from a 5-4 court with Kennedy sometimes swinging to our side, to an entrenched 5-4 “anti” court, leaving only Justices Ruth Bader Ginsburg, 85, Stephen Breyer, turning 80 in August, and the more youthful Elena Kagan and Sonia Sotomayor.

Further, Kennedy was always a hopeful check against the most egregious cases of government actors using their position to promote religion. With his replacement, the court will be more willing to accept cases that will allow it to drastically rewrite state/church law from the last 70 years, confident that it will always have the five votes it needs.

Kennedy importantly sided with the preservation of Roe v. Wade in several major cases. It is frightening to see CNN legal analyst Jeffrey Toobin tweet today his prediction: “Abortion will be illegal in 20 states in 18 months.”

The retirement announcement makes voter registration campaigns ever more crucial in this election year, however hobbled they may be by gerrymandering and ploys to disenfranchise the young, the poor, the racial minorities and students.

“We’re secular and we vote” has never been a more important battle cry.

We’re already in the battle of our lives with the Religious Right takeover of the White House and Congress. FFRF is grateful for your membership and your support of our work to defend the vital wall of separation between church and state and to work so that freethought and reason will prevail.