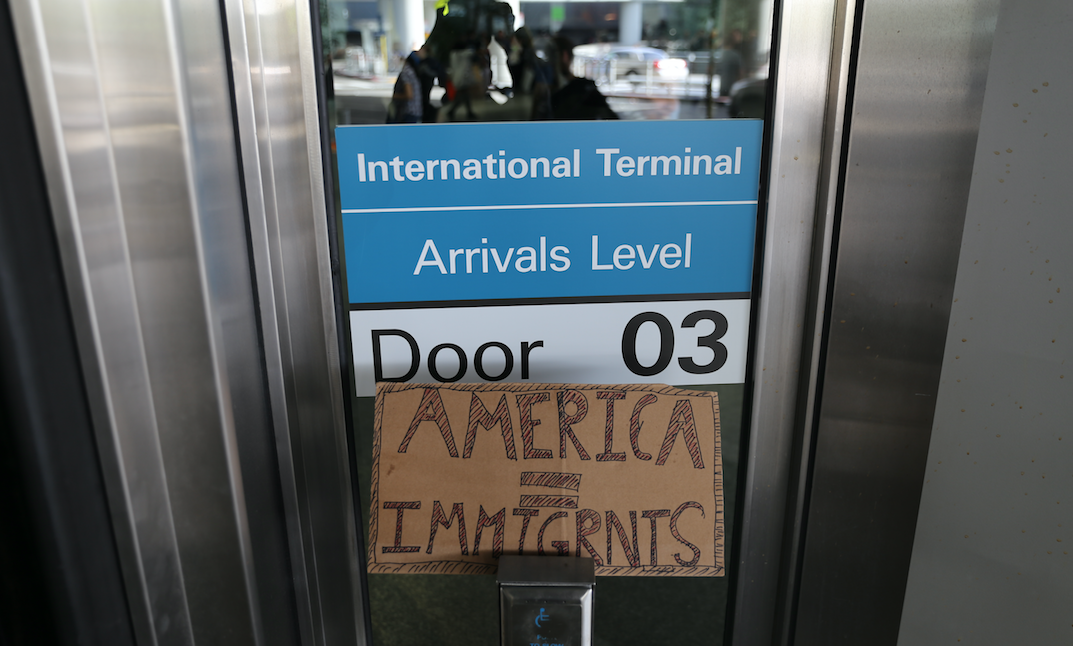 The Supreme Court, in a 5-4 decision, decided on narrow grounds, adopted a recklessly “deferential standard of review” for presidential authority. In light of concerns over “intruding on the president’s constitutional responsibilities in the area of foreign affairs,” it noted that “the proclamation does not exceed any textual limit on the president’s authority.”

The travel ban blatantly disregards the Establishment Clause, as FFRF demonstrated in its “friend of the court” brief it filed before the Supreme Court against the ban. The Trump administration’s history of excluding from entry to the United States immigrants and non-immigrants from selected majority-Muslim countries violated the Establishment Clause of the First Amendment, FFRF had contended. The travel ban also contravenes Article VI of the U.S. Constitution, which prohibits a religious test for office or public trust.

But the Supreme Court’s decision, written by Chief Justice John Roberts, disregarded these actualities. After finding that the ban “is squarely within the scope of Presidential authority under the [Immigration and Nationality Act],” Roberts adopted a “deferential standard of review” in light of concerns over “intruding on the president’s constitutional responsibilities in the area of foreign affairs.” The court declined to treat the president’s statements regarding the discriminatory purpose of the ban as direct evidence of a discriminatory intent and instead only considered “the significance of those statements in reviewing a presidential directive, neutral on its face, addressing a matter within the core of executive responsibility.”

“This decision is shocking on two fronts. First, America is not supposed to have an imperial presidency. The Supreme Court failed its duty to check the president’s unconstitutional decision,” comments FFRF Co-President Annie Laurie Gaylor. “Second, its judgment will cement the notion of second-class status for those belonging to minority religions or no religion at all.”

Roberts writes: “… because there is persuasive evidence that the entry suspension has a legitimate grounding in national security concerns, quite apart from any religious hostility, we must accept that independent justification.”

As Justice Sonia Sotomayor writes in her rousing dissent, “the answer is unquestionably yes” as to whether the primary purpose of the ban is religious animus.

President Trump’s statements showed that the serial travel ban orders were motivated by a desire to discriminate against unpopular religious minorities. When Trump issued his most recent executive order on Sept. 27, 2017, he repeatedly linked it to previous orders, calling it a “larger, tougher, and more specific” ban.

“The true hypocrisy of this decision is evident when comparing it to the Supreme Court’s other major religious freedom decision this term,” notes FFRF Legal Director Rebecca Markert. “While in Masterpiece Cakeshop the Court interpreted mild, factual statements by the Colorado Civil Rights Commission as statements of hostility toward a Christian baker, in this case a majority of the same Court turned a blind eye toward repetitive, openly hostile statements by the President against Muslims.”

Sotomayor notes this inconsistency in her dissent, writing “the court recently found less pervasive official expressions of hostility and the failure to disavow them to be constitutionally significant [citing Masterpiece]. It should find the same here.”

A silver lining for state/church separation is that the Supreme Court has narrowed the decision’s scope.

“The case before us differs in numerous respects from the conventional Establishment Clause claim,” it states. “Unlike the typical suit involving religious displays or school prayer, plaintiffs seek to invalidate a national security directive regulating the entry of aliens abroad.”

Another silver lining is Sotomayor’s dissent, joined by Justice Ruth Bader Ginsburg. (Justices Elena Kagan and Stephen Breyer issued their own dissent.)
“The United States of America is a nation built upon the promise of religious liberty,” Sotomayor writes. “Our Founders honored that core promise by embedding the principle of religious neutrality in the First Amendment. The court’s decision today fails to safeguard that fundamental principle.”

Sotomayor adds that the judgment “leaves undisturbed a policy first advertised openly and unequivocally as a ‘total and complete shutdown of Muslims entering the United States’ because the policy now masquerades behind a façade of national-security concerns.”

Importantly, she points out that the ruling fundamentally “erodes the foundational principles of religious tolerance that the court elsewhere has so emphatically protected, and it tells members of minority religions in our country ‘that they are outsiders, not full members of the political community,’” quoting a previous landmark Supreme Court decision.

The Freedom From Religion Foundation, a national nonprofit organization based in Madison, Wis., is the largest U.S. association of freethinkers, representing over 33,000 atheists, agnostics, and other freethinking American citizens all over the nation.