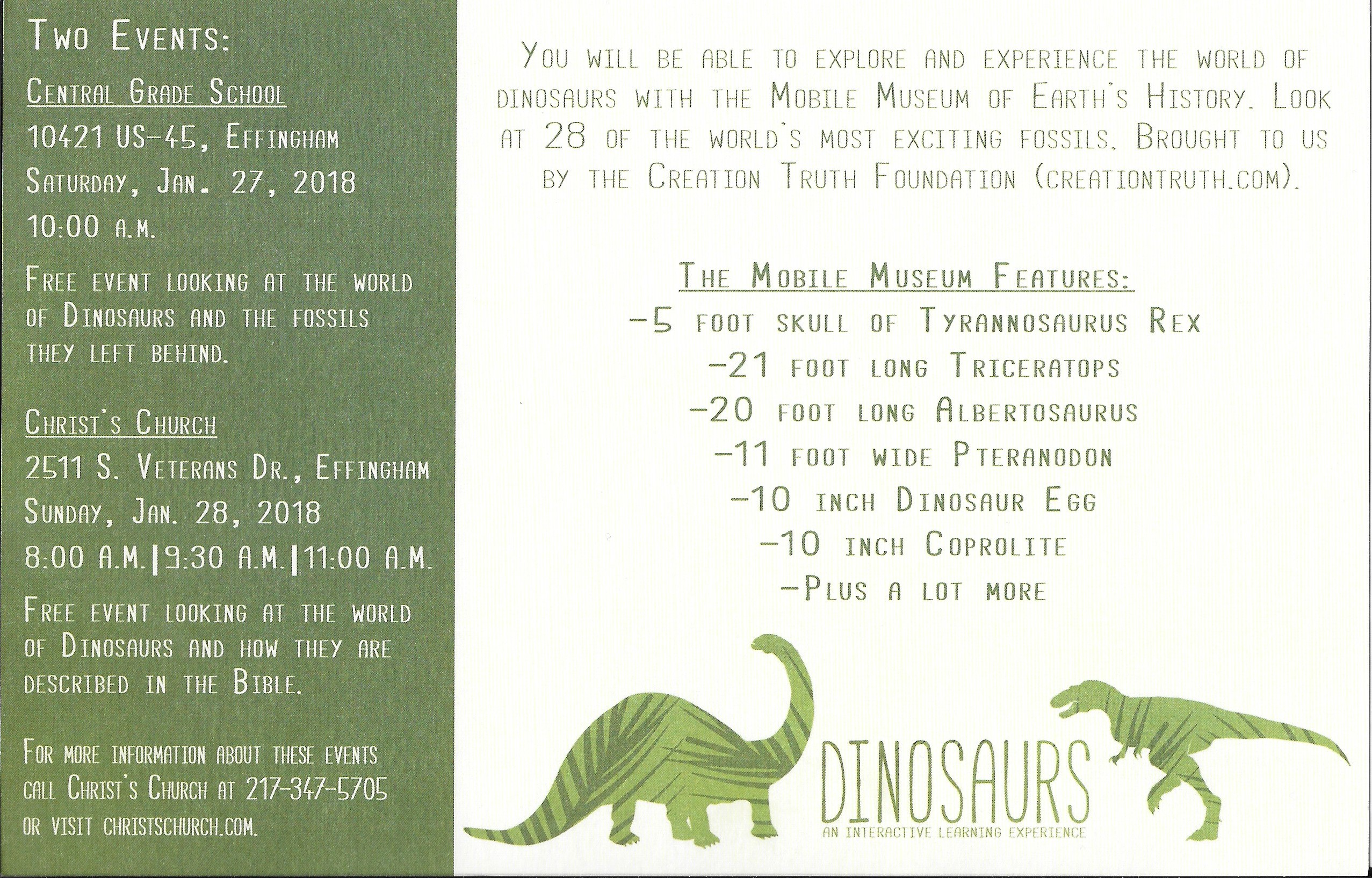 The Freedom From Religion Foundation is taking exception to an Illinois public school encouraging students to attend a creationism-promoting event at the school.

A concerned district parent contacted FFRF to report that Effingham Community School Board President Jeff Michael arranged for Christ's Church, where he is a pastor, to give a presentation about dinosaurs to students at Central Grade School in Effingham. Ill., during school hours. Elementary-aged students were given flyers promoting a weekend presentation at the school that promised to show students a "mobile museum" of dinosaur fossils. The weekend presentation on Jan. 27 was hosted by the Creation Truth Foundation, which was not disclosed in the flyer given to students. A second flyer, promoting the event to the community at large, did divulge the event's religious host and also advertised a separate presentation at Christ's Church on Jan. 28 as involving "how [dinosaurs] are described in the bible." The Creation Truth Foundation reportedly promoted biblical creationism at both weekend events.

Local media reported that the flyer sent home with students made "no mention of the Creation Truth Foundation, simply listing the event and some of the fossils on display." Michael reportedly explained that the religious content of the school presentation was hidden because "we have limited free speech in a public school," and that he thought mentioning the religious content of the school presentation would have been constitutionally problematic.

It is indeed unconstitutional for a school district to allow outside adults to promote a religious event to a captive student audience during a school-sponsored presentation.

"It is well settled that public schools may not advance or promote religion," FFRF Staff Attorney Ryan Jayne writes to Effingham CUSD#40 President Mark Doan. "The Supreme Court has held that 'the preservation and transmission of religious beliefs and worship is a responsibility and a choice committed to the private sphere.'"

Michael's promotion of the event to public school students gives the appearance that he is deliberately using his position as school board president to promote his church's religious mission, FFRF asserts. Inviting ministers or other church representatives to discuss topics like evolution or paleontology raises the obvious specter of creationism. When the same presenters also offer weekend presentations teaching creationism — i.e., that evolution and paleontology are false — the appearance of a religious purpose is overwhelming.

Teaching creationism or any of its offshoots, such as intelligent design, is religious instruction rather than science, because creationism is not based in fact, FFRF reminds Doan. Courts have routinely found that such teachings are religious, despite many new and imaginative labels given to the alternatives. In 1987, the Supreme Court struck down teaching of "scientific creationism" in public schools, and federal courts have consistently rejected creationism and its ilk in public schools ever since.

The school district has a constitutional obligation to remain neutral toward religion, FFRF asserts. Parents, not the school district, are responsible for determining the religious or nonreligious upbringing of their children. FFRF requests that the district take reasonable steps to ensure that future school presentations do not include the promotion of religious events and that it discourages the use of unqualified church representatives to teach students about paleontology.

"This event was an underhanded way to sneak in nonsensical propaganda into the public school system," says FFRF Co-President Annie Laurie Gaylor. "Such young kids should not be subjected to this absurdity."

The Freedom From Religion Foundation is a national nonprofit organization with more than 32,000 members and 20 chapters across the country, including 1,000-plus in Illinois and a chapter in Chicago. FFRF's purposes are to protect the constitutional principle of separation between state and church, and to educate the public on matters relating to nontheism.