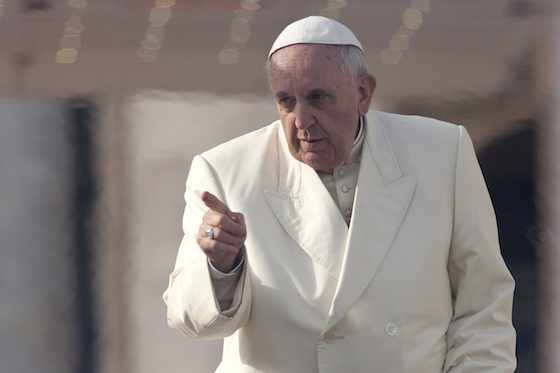 While being credited as a reformer, Pope Francis has done nothing to ease any of the Roman Catholic Church’s draconian decrees and doctrines. Yet the pope has excelled in creating a public relations image of a “kinder, gentler” church hierarchy.

But the pope’s true colors were revealed yesterday, as he publicly accused victims of Chile’s most infamous priestly pedophile scandal of “slander.” Ironically, the pope’s purpose in visiting Chile was supposedly to help “heal” those survivors of priest abuse.

Chile’s most notorious priestly scandal has involved Fernando Karadima, who abused dozens of children under his care. Karadima’s decades-long crime spree was ignored — which is to say, covered up — by the church until the victims went public with the abuse in 2010. Karadima, then 80, was merely sanctioned in 2011 by the Vatican, which removed him from all pastoral duties and “sentenced” him to a “life of penance and prayer” for his crimes. Statute of limitations or decisions by fearful prosecutors and judges meant no criminal resolution.

In 2015, Pope Francis renewed Chilean anger over Karadima’s crimes and church complicity by making Juan Barros Madrid — a protégé of the abusive priest — a bishop. Even some of Chile’s church leaders opposed the appointment of Barros as bishop because of accusations from what they called “truthful and reliable” victims who charged Barros with personally knowing of the abuse, but doing nothing. It recently came to light that Pope Francis acknowledged the church leaders’ complaints in a letter in January 2015, but ignored their call not to promote Barros.

Pope Francis’ claim of “zero tolerance” seems to apply to victims, not the accused. When the pope said yesterday that “there is not one single piece of proof” of cover-up, that “It’s all calumny. Is that clear?” he is disregarding the sworn, reliable testimony of the victims, just as the church ignored their claims of abuse. In short, he’s calling those victims liars.

Earlier on his Chilean trip, Francis had hypocritically referenced “the pain and shame, that I feel at the irreparable damage caused to children by ministers of the church.”

Francis has done nothing to bring genuine justice to the victims or to their rapists and abusers. Nothing but talk. Francis could be directing his church, which frequently seeks to influence laws, to lobby and expend resources to extend statutes of limitations. Instead, here in the United States, the Catholic Church has spent millions fighting against legislation to extend statutes of limitation. Bribery has been alleged in such cases, too. The Catholic Church, as an early clerical whistleblower put it decades ago, remains an “organization preaching morality and providing sanctuary to perverts.”

The pope could turn over all accusations known to the Vatican and its diplomatic embassies to civil authorities. As the Catholic Reporter suggests, he has the power to change canon law and abolish the pontifical secret over allegations of sexual abuse committed by clergy and Catholic laity.

But he does none of that. Instead, his real interest is in protecting his church, which means protecting the abusers. Pope Francis is all talk.

For once, his talk matches his actions.