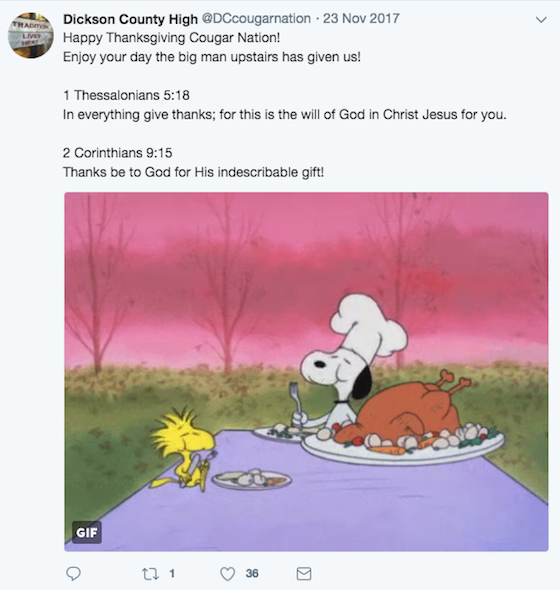 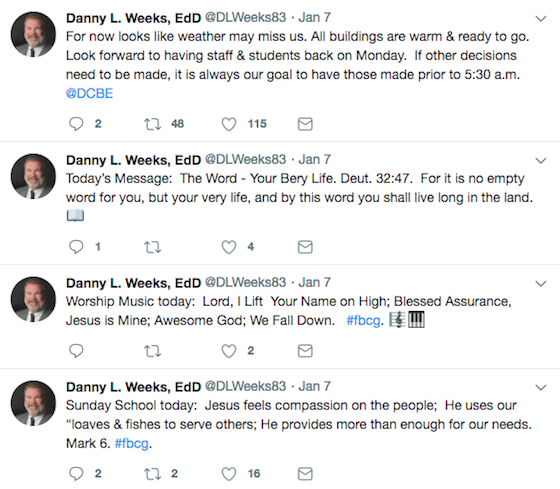 The Freedom From Religion Foundation is reiterating its request that a Tennessee school district put an end to religious postings on its social media pages.

FFRF first wrote to the Dickson County School District on Dec. 14, 2016, regarding religious tweets on the Dickson County High and Dickson County Schools Twitter accounts. Director of Schools Danny Weeks responded to FFRF’s initial request on Jan. 9 last year by assuring FFRF that the concerns would be discussed with the managers of the accounts. After FFRF received that response, multiple instances of new religious posts on the district’s social media accounts have been reported to the state/church watchdog.

On Nov. 23, 2017, the Dickson County High Twitter account tweeted out two bible verses (1 Thessalonians 5:18 and 2 Corinthians 9:15) along with the messages, “Happy Thanksgiving Cougar Nation! Enjoy your day the big man upstairs has given us!” and “Thanks be to God for His indescribable gift!”

It was also reported that Weeks’ Twitter account, which lists him as director of schools, posts both important district-related information to parents and students and frequent religious messages.

It is well settled that public schools may not advance, prefer or promote religion. Public school employees are government actors and must act within the parameters set by the Establishment Clause’s separation of church and state. This applies to the district’s webpage and any social media pages — including those utilized by school employees — which represents the views of the school district these employees represent.

“It is inappropriate for a public school district director to promote bible verses on an official social media account,” says FFRF Co-President Annie Laurie Gaylor. “This sends a divisive message to non-Christian students that they are not entirely welcome in their school.”

The Freedom From Religion Foundation is a national nonprofit organization with 30,000 members and chapters across the country, including more than 300 in Tennessee and a chapter. FFRF's purposes are to protect the constitutional principle of separation between state and church, and to educate the public on matters relating to nontheism.