FFRF’s “In Science We Trust” billboard goes up in Georgia 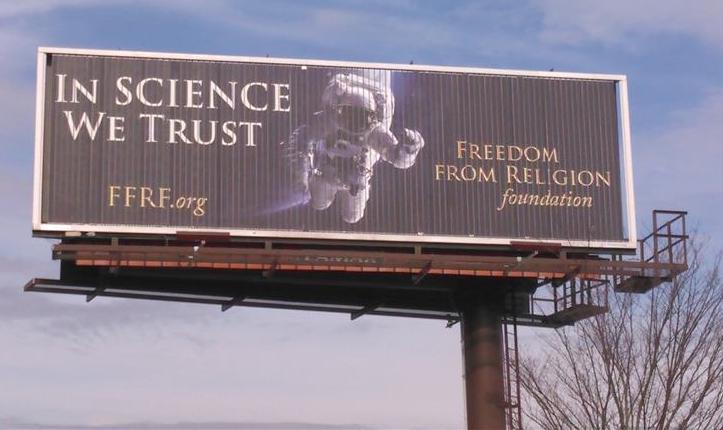 Many commuters in the greater Atlanta area will be noticing in the coming days a secular play on the national motto.

The Freedom From Religion Foundation, the nation's largest association of freethinkers (atheists and agnostics), has placed a billboard with the saying "In Science We Trust" on Cobb Parkway, north of Mars Hill Road. The billboard went up yesterday and will be displayed for approximately one month.

FFRF member Jack Egger paid for the sign, which depicts an astronaut suspended in outer space to illustrate its slogan.

"If all of us had faith in science and humanism, we would improve life on Earth so fast," says Egger. "By giving up supernaturalism, we all can have a more fulfilling life, with a brighter, more peaceful and predictable future."

Notes Annie Laurie Gaylor, FFRF co-president, "We need to place our trust not in some deity to rescue us, but in reason, compassion and humanity. The only afterlife that should concern us is leaving our descendants a secure and pleasant planet and future."

Gaylor points out that "In God We Trust" is a johnny-come-lately motto adopted by Congress during the Cold War. She said the motto, to be accurate, would have to be worded, "In God Some of Us Trust," and suggested that would be a "very silly" motto. The original national motto, "E Pluribus Unum [From many, come one]," chosen by a committee of Franklin, Adams and Jefferson, celebrates unity through diversity and pluralism.

The Freedom From Religion Foundation and its membership work to promote the viewpoint of freethinkers, including atheists and agnostics, and to protect the constitutional principle of separation between religion and government. FFRF has roughly 30,000 members and 20 chapters all over the country, including 500-plus and an Atlanta chapter in Georgia.