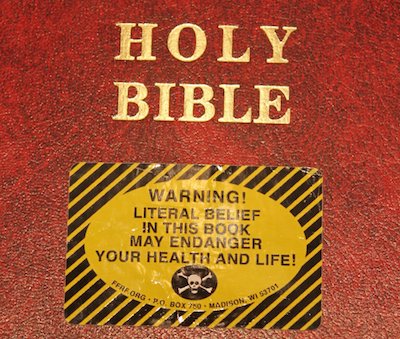 The Freedom From Religion Foundation wants to find out if the Constitution was recently violated at Kentucky's hallowed seat of government. That's why it is seeking records regarding the staging at the Capitol of a New Year's bible-reading marathon.

Starting on New Year's Eve, a continuous bible-reading session was held that lasted for four days. All 120 counties around the state reportedly participated, with the focal point being the Capitol building, where the governor kicked off the occasion.

"States that don't recognize the word of the Lord suffer calamities, warns Pastor Gil Finley of Heavenly Outpour Church," the Frankfort, Ken., State Journal recently reported. "Finley, a Frankfort resident for over 30 years, co-hosted a several-day-long bible-reading marathon in the Capitol rotunda that took place around the clock from New Year's Eve until 6 p.m. Thursday. Gov. Matt Bevin and his family started the event by reading from Genesis 1 through 9. Other government officials worshiped at various times over the multiday event."

The State Journal notes that the Capitol was open 24 hours to facilitate the bible reading.

FFRF is writing to the official record-keepers in both the Capitol and the governor's office to ascertain if state machinery and resources were misused for the almost interminable display of religiosity in Kentucky's premier governmental institution. To that end, FFRF Director of Strategic Response Andrew Seidel is requesting all communications regarding rental of the Capitol for the marathon, as well as records relating to permits, permit applications and fees for this event.

"This seems to be such a misappropriation of the seat of state government for religious purposes," says FFRF Co-President Annie Laurie Gaylor. "We want to determine whether state resources were willfully allowed to be squandered for the bible-reading marathon."

In any case, she adds, it is vital that the bible, with its Bronze Age morality, does not become the basis for legislation.

"I wonder if they actually read the whole bible," says Seidel. "Did they read Matthew 6:5 where Jesus condemns public piety as hypocrisy. Did they read Ephesians 6:5 where slaves are told to obey their masters? Did the women participating in the reading skip over 1 Timothy 2:12, which tells women to be silent?"

The Freedom From Religion Foundation is seeking the truth on behalf of its Kentucky membership, its Kentucky chapter, as well as more than 30,000 members throughout the United States. It works to uphold the constitutional principle of the separation of between state and church, and educates the public on matters relating to nontheism.