Away with the manger, FFRF insists 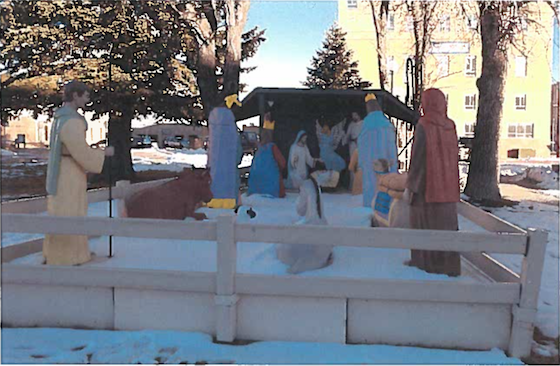 The Freedom From Religion Foundation has sent a letter to a Wyoming town asking for the removal of an unconstitutional Christian nativity display.

An exhibit of the manger scene in the Christian myth of Jesus’ birth has been put on display in a public park in Casper, Wyoming. It has been reported to FFRF that the nativity scene was set up by the county of Natrona and is the only display in the park.

“It is unlawful for the city of Casper to maintain, erect or host a holiday display that consists solely of a nativity scene, thus singling out, showing preference for and endorsing one religion,” writes FFRF Legal Fellow Chris Line. “The Supreme Court has ruled it is impermissible to place a nativity scene as the sole focus of a display on government property.”

Line also notes that it is irrefutable that the model of Jesus in a manger is a Christian symbol.

Displaying an inherently Christian message unmistakably sends a message to citizens and visitors that Casper endorses the religious beliefs embodied in the display. When the city displays this biblical manger scene it signals the government’s approval of Christianity, thus alienating the nearly 30 percent of Americans who are not Christian — including the 23 percent who are nonreligious.

“Public nativity scenes send the exclusionary message to this growing population of nonbelievers and non-Christians that they are outsiders in their community,” says FFRF Co-President Annie Laurie Gaylor. “There are plenty of private grounds and places of worship where religious displays may be freely, and legally, placed.”

When the government endorses and shows preference for one religion over others, it strikes a blow at religious liberty by forcing taxpayers of all faiths and of no religion to support a particular expression of worship. FFRF is insisting that the city take immediate steps to remedy this First Amendment violation.

The Freedom From Religion Foundation is a national nonprofit organization with roughly 30,000 members and 20 chapters across the country, including members in Wyoming. FFRF's purposes are to protect the constitutional principle of separation between state and church, and to educate the public on matters relating to nontheism.