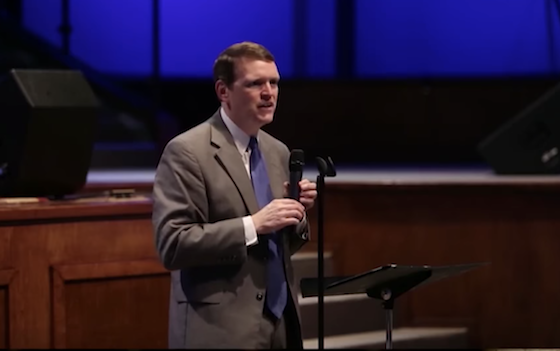 In a significant victory for state-church separation and the Freedom From Religion Foundation, President Trump’s worst judicial nominee, Jeff Mateer, will not get a lifetime federal appointment.

One day after urging the White House to reconsider Mateer and Brett Talley (a blogger who has never tried a case), Senate Judiciary Committee Chair Chuck Grassley said that the two “will not be confirmed,” according to the Washington

In a significant victory for state-church separation and the Freedom From Religion Foundation, President Trump’s worst judicial nominee, Jeff Mateer, will not get a lifetime federal appointment.

One day after urging the White House to reconsider Mateer and Brett Talley (a blogger who has never tried a case), Senate Judiciary Committee Chair Chuck Grassley said that the two “will not be confirmed,” according to the Washington Post. Grassley cited comments both men have made as the reason for their failed nominations.

Of the many groups opposing Mateer, FFRF was the one that compiled the definitive record of Mateer’s unfitness for office. It submitted a full report to Senate Judiciary Committee members cataloging Mateer’s many sins. The report was authored by FFRF’s Director of Strategic Response Andrew L. Seidel with help from Staff Attorney Ryan Jayne. Seidel and FFRF Legal Director Rebecca Markert also traveled to Capitol Hill and spoke with staffers for many committee members.

“We’ve tangled with Mateer before and knew he would be a disaster for the federal bench,” explains Seidel, who put in countless hours watching Mateer’s talks and reading his words. “We pulled out all the stops to end his hopes at a lifetime appointment.”

Mateer would have been a catastrophe, FFRF points out. Mateer previously worked for a Christian legal ministry called First Liberty Institute. He has termed the constitutional separation between state and church a myth because it is not in the U.S. Constitution “verbatim.” Mateer also claims that adultery, homosexuality and no-fault divorce are against God's law.

But it wasn’t just the ideological extremism that concerned FFRF. Mateer has also shown a disturbing willingness to use his public office to unethically promote his personal religion and the interests of his former employer, FFRF charges. And Mateer is a mediocre lawyer with no judicial experience who did not get his current job with the Texas attorney general's office on merit. Texas Attorney General Ken Paxton simply appointed Mateer. Paxton is very close with the First Liberty Institute's executive director, Kelly Shackelford, and credits him with encouraging Paxton to run for the state House seat he won in 2002. Mateer has used this public office to promote the institute’s agenda, including having the office intervene into cases the institute is litigating.

While at the First Liberty Institute, Mateer apparently advised clients to violate the law when it furthered its religious agenda, in some cases costing local governments tens of thousands of dollars.

One of the greatest dangers of Mateer’s appointment would have been that he would have been one of two judges in the jurisdiction where First Liberty Institute is located. And under the federal rules, he would have had no obligation to recuse himself from the institute’s cases. That means that he could have decided every big case in the institute’s favor. If that fear seems overblown, know that the Texas attorney general’s office, where Mateer currently works, has deliberately targeted federal judges in that state for cases that have national impact.

“This is a huge triumph for the people of Texas and for FFRF, which has been working to build the influence of freethinking Americans in Washington, D.C., for about a year now,” says FFRF Co-President Annie Laurie Gaylor. “Our legal team represents FFRF and freethinkers in court and our Strategic Response Team is working to represent us with elected officials.”

Mateer would have been a terrible judge and a devastating blow to the judiciary.