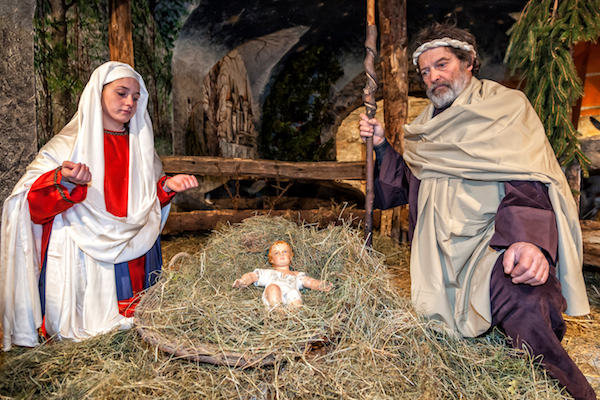 The Freedom From Religion Foundation (FFRF) is illuminating a California town about the problems arising from a live nativity scene at its recent Christmas tree-lighting ceremony.

FFRF contends that it is inappropriate for the city to organize, host and lend its name to a Christmas event that features a live nativity scene, thus placing the imprimatur of the city of Bakersfield behind Christian religious doctrine. This excludes the nearly 30 percent of citizens who are not Christian — Jews, Muslims, Native American religion practitioners etc. — including the 23 percent of Americans who are nonreligious.

In addition to sending a message to non-Christians and the nonreligious that they are outsiders in their own community, it is unconstitutional to host a live nativity scene in a city event.

"In County of Allegheny v. ACLU of Pittsburgh (1989), the Supreme Court held that a county government's crèche displayed in the county courthouse was an unconstitutional endorsement of religion," FFRF Associate Counsel Elizabeth Cavell writes to Bakersfield City Attorney Virginia Gennaro. "The court found that government display of a nativity scene 'sends an unmistakable message that it supports and promotes the Christian praise to God that is the crèche's religious message.' The inherently Christian live nativity in the city's Christmas celebration similarly sends the message that the city endorses the religious beliefs embodied in the nativity."

The live nativity is apparently sponsored by a local church, as was the crèche in Allegheny, yet city officials promoted it as part of the city's official holiday celebration. Under the Constitution, the city cannot endorse the religious messages of those groups.

In Allegheny, the Supreme Court stated, "The government may acknowledge Christmas as a cultural phenomenon, but under the First Amendment it may not observe it as a Christian holy day by suggesting people praise God for the birth of Jesus." Councilwoman Sullivan's remarks make plain a religious purpose for including a live nativity in the city's holiday event —celebrating the birth of Jesus as the "true history and true meaning" of Christmas. This goes beyond what is permissible in a city-sponsored holiday celebration.

"The city of Bakersfield has crossed the constitutional line in multiple ways because of its religion-infused Christmas tree-lighting ceremony," says FFRF Co-President Annie Laurie Gaylor. "In an increasingly diverse and secular California, this is no way to make its residents feel at home."

FFRF is asking the city of Bakersfield to ensure that future holiday celebrations hosted by the city celebrate the diversity of its religious and nonreligious community, rather than unconstitutionally endorsing one specific religious creed. If private sponsors wish to host an exclusively Christian event, they are free to do so, but not with the endorsement of the city or at a city function.

The Freedom From Religion Foundation is a national nonprofit organization with approximately 30,000 members and 20 chapters nationwide, including more than 3,500 in California and a chapter based in Sacramento. Its purposes are to protect the constitutional principle of separation between state and church and to educate the public on matters related to nontheism.

Photo by DARRAY via Shutterstock