Update: The proposed flag-raising of the FFRF-sponsored “A” flag is being moved from Dec. 4 to the month of January. Due to an anticipated backlash to a December display, Somersworth Mayor Dana Hilliard suggested the change, and FFRF Member Richard Gagnon agreed to the move. Hilliard has said that he intends to declare January as tolerance month within the city. The flag is scheduled to go up on Jan. 2 and remain flying through the end of that month. 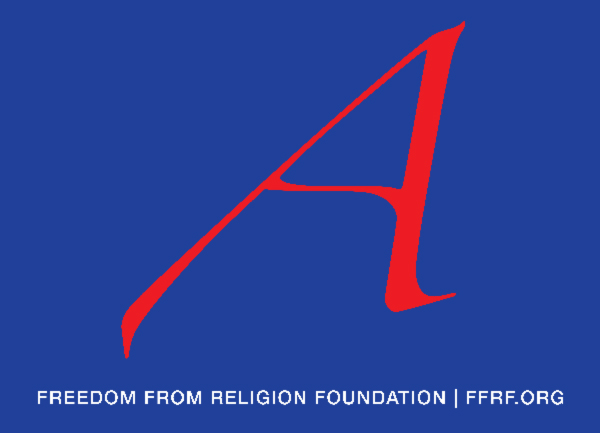 The Freedom From Religion Foundation is hoisting a first-of-its-kind flag — honoring atheism and freethought — to protest a New Hampshire town's Ten Commandments display.

On Monday, Dec. 4, FFRF is sponsoring the raising of an "A" flag in Somersworth, N.H. The flag will be up in the "Citizen's Place" traffic island from Dec. 4 through Dec. 21 to honor freethinkers and the ratification of the Bill of Rights, which took place on Dec. 15, 1791.

This year, the city installed two flagpoles near a contentious Ten Commandments monument at the traffic island for community groups to celebrate events. The addition of something other than a Judeo-Christian symbol is an attempted gesture by the city to get around legal precedent against stand-alone Ten Commandments markers on public property.

"The 3,000-pound monolith was knocked down in August 2016, setting off a new round of discussions as to whether or not the religious symbol violates the constitutional provision of separation of church and state," the local paper reports. "In determining whether the Ten Commandments monument should be restored, Mayor Dana Hilliard offered a plan to create a citizen's park, adding two flagpoles which could be used by civic groups to celebrate important events."

The City Council vote was disputatious, with two councilors rightly objecting to the whole concept.

"This plot of land can't truly be a place for all citizens as long as it exclusively focuses on a religion not shared by all citizens," Jessica Paradis reportedly said. "That is why we have laws that are supposed to separate church and state."

"The optics of that little traffic island when you drive through now, especially since we have flagpoles, are further poking the eye of the Constitution," Soldati said. "According to eight out of 10 court decisions, it does promote Christianity and it is in violation of the Constitution."

FFRF agrees with the councilors' eloquent reasoning and has asked for several years that the Ten Commandments monument be removed. Meanwhile, the state/church separation group wants to even it out with a freethought perspective.

"We believe the town needs to 'honor thy First Amendment,'" says FFRF Co-President Annie Laurie Gaylor. "With such a religious shrine glaringly on display, we have to present our viewpoint."

The Freedom From Religion Foundation is a national nonprofit organization with approximately 30,000 nonreligious members across the country, including in New Hampshire. Its purpose is to protect the constitutional principle of separation between state and church and to educate the public on matters relating to nontheism.