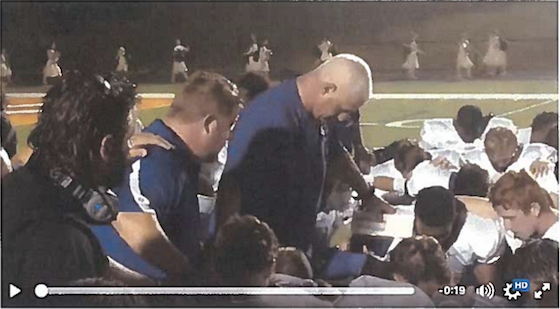 The Freedom From Religion Foundation has put an end to a Georgia high school coach’s practice of praying with his players.

It was reported to FFRF that a Coweta High School football coach, John Small, had made it a habit to pray with his team, which was filmed at a recent game.

FFRF sent a letter to the Coweta County School System warning that it is illegal for public school athletic coaches to further personal religious beliefs by leading their teams in prayer. Coach-led prayers, FFRF points out, equate to a government advancement and endorsement of religion — a stark violation of the Establishment Clause of the First Amendment.

“Coach Small’s conduct is unconstitutional because he endorses and promotes his religion when acting in his official capacity as a school district employee,” wrote FFRF Legal Fellow Christopher Line to Superintendent Steve Barker on Oct. 25.

Not only must public school coaches refrain from leading prayer themselves, but also from participating in students’ prayers, FFRF informed the district. When a public school employee in that official role organizes and advocates for team prayer, religion is endorsed on the district’s behalf.

The district promptly responded notifying FFRF in an Oct. 26 letter that Barker has met with the principals of all three high schools to inform them that neither school staff nor volunteer staff may lead or participate in religious activity before, during or after high school football games.

“We appreciate the district’s swift action to address the violation and its commitment to protecting the rights of conscience for all of its students,” says FFRF Co-President Annie Laurie Gaylor.

The Freedom From Religion Foundation is a national nonprofit organization with more than 29,000 members across the country, including 400-plus in Georgia. Its purposes are to protect the constitutional principle of separation between state and church, and to educate the public on matters relating to nontheism.