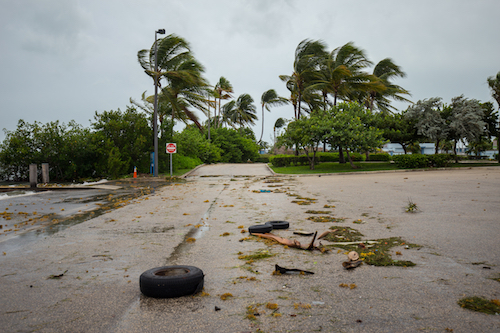 A Florida nonprofit seems more intent on scoring points rather than helping people in the aftermath of Hurricane Irma.

Nonbelief Relief, a humanitarian adjunct of the Freedom From Religion Foundation, sent a check for $2,500 to Boca Helping Hands after Hurricane Irma.

"You are one of four state or local groups in Florida with high ratings from Charity Navigator that we are sending money to help support extra relief following the storm," Nonbelief Relief's letter stated.

The letter explicitly laid out a major reason for the donation.

"We think it is important that it be known that secularists are just as charitable, if not more charitable than the religious, but have simply lacked the infrastructure to give as a united group under the banner of freethought," said Annie Laurie Gaylor, Nonbelief Relief's administrator. "Most atheists and freethinkers work to make a heaven on this planet, and therefore we greatly appreciate your humanitarian actions."

Perhaps the explicit stating of the motive was a bit too much for Boca Helping Hands to take.

"Boca Helping Hands has been participating with a number of local partners to provide relief to the victims of the hurricane," Boca Raton Helping Hand's Inteim Executive Director tersely replied. "However, we are not currently soliciting contributions for any further relief efforts." The group sent back FFRF's letter and check.

This message to Nonbelief Relief stands in stark contrast to the message on Boca Raton Helping Hands' website: "All contributions are welcome."

"Our charity is called Nonbelief Relief. But we find it beyond belief that a charitable organization would put its biases above the needs of its recipients," says Gaylor.

Nonbelief Relief was created by FFRF's executive board as a separate 501(c)(3) nonprofit to remediate conditions of human suffering and injustice, and to provide a charity under the banner of freethought.

Nonbelief Relief has no ulterior motive of "conversion" to freethought. But in giving aid in cases of natural disaster and mass suffering, it does have a legal purpose: to challenge the Internal Revenue Service's discriminatory favoritism of churches and church charities, which are exempted from accountability.

All other 501(c)(3) groups, including FFRF and Nonbelief Relief, must file an annual, detailed tax return in order to sustain tax-exempt status. Nonbelief Relief has notified the IRS it will not file any forms churches or church charities are exempted from.

Nonbelief Relief will be looking for a substitute local or regional charity in Florida to award the modest grant to.