FFRF asks pious Mich. football coaches to cut it out 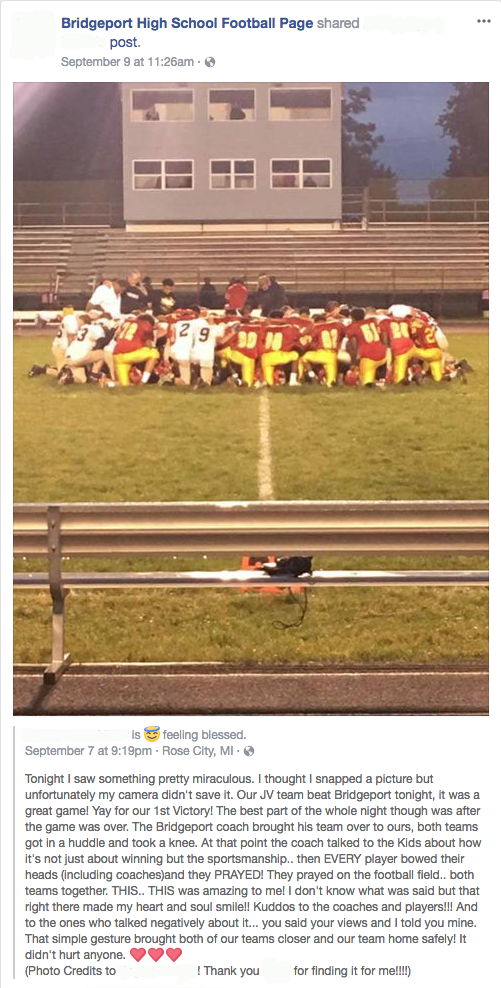 The Freedom From Religion Foundation is attempting to block a couple of Michigan high school football coaches from exhibiting their piety on the field.

A concerned citizen informed FFRF that football coaches at Bridgeport High School lead their teams in prayer. The complainant informed the state/church watchdog that at a game on Sept. 7, the Bridgeport Junior Varsity football team coaches and the opposing team prayed together after the game. This prayer circle, which shows coaches participating in the prayer, was photographed and shared on social media and can be seen in the photograph above.

It is inappropriate and illegal for public school athletic coaches to lead their teams in prayer, FFRF reminds the Bridgeport Spaulding School District.

"The Supreme Court has continually struck down school-sponsored prayer in public schools," FFRF Legal Director Rebecca S. Markert writes to Bridgeport Spaulding School District Superintendent Carol W. Selby. "Public school coaches must refrain not only from leading prayers themselves, but also from participating in students' prayers. It is unconstitutional for public school employees to participate in the religious activities of their students."

In Borden (2008), the 3rd U.S. Circuit Court of Appeals held the high school football coach's extensive history of organizing, leading and participating in prayers before games was unconstitutional because it violated the Establishment Clause. In that case, the court stated that the coach's involvement in the prayer by "taking a knee" and "bowing his head" during the prayers, even when student-led, "would lead a reasonable observer to conclude he was endorsing religion."

The court in Borden also rejected the coach's argument that the school district's policy of prohibiting its employees from engaging in prayer with students violated the employees' right to free speech. In fact, the court found that the school district had a right to adopt guidelines restricting this activity because of its concern about potential Establishment Clause violations.

The conduct of the Bridgeport High coaches is unconstitutional because coaches are endorsing and promoting their own religion while acting in their official capacities as school district employees. Certainly, they represent the school and the team when they act in their official roles as a coach of a public school football team. Therefore, coaches cannot lead teams in prayer and cannot organize or advocate for students to lead team prayer, either.

"We see here conduct extremely unbecoming of coaches," says FFRF Co-President Annie Laurie Gaylor. "Public school employees should be aware that a good portion of their student population is most often comprised of individuals with different beliefs or no belief. Students should not be expected to pray to play."

FFRF is asking Bridgeport Spaulding School District to commence an immediate investigation into the alleged complain and take swift action to stop any school-sponsored prayers occurring within any district athletic programs.

The Freedom From Religion Foundation is a national nonprofit organization with more than 29,000 members across the country, including over 700 in Michigan. FFRF's purposes are to protect the constitutional principle of separation between state and church, and to educate the public on matters relating to nontheism.