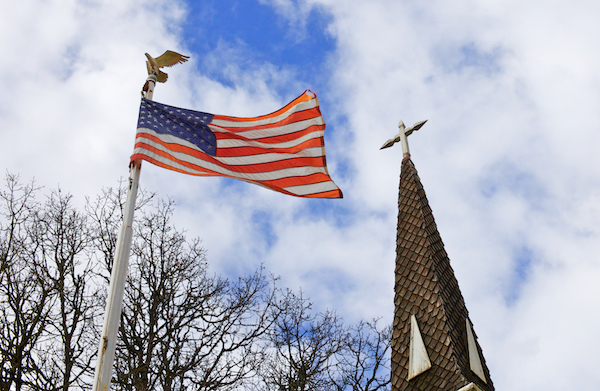 The Freedom From Religion Foundation is blasting a ruling yesterday by an appeals court that blesses Christian prayer at governmental meetings.

The Sixth Circuit Court of Appeals in Cincinnati on Wednesday issued LINK http://www.opn.ca6.uscourts.gov/opinions.pdf/17a0207p-06.pdf a divided decision declaring constitutional the practice of opening meetings with prayer by the Board of Commissioners in Jackson County, Mich. The ruling unfortunately reversed an earlier decision by a three-judge panel declaring the practice unconstitutional. Board members on a rotating basis deliver prayers at the start of each meeting. The decision even notes that these prayers are "generally Christian in tone and often ask 'God,' 'Lord' or 'Heavenly Father' to provide the Commissioners with guidance."

The majority opinion rests on the same convoluted appeals to "tradition" and "history" used to justify other legislative prayer practices. Such unpersuasive arguments are rejected by courts when addressing other historically accepted practices, such as slavery or the denial of women's suffrage. The court assertion that "the Framers considered legislative prayer a benign acknowledgment of religion's role in society" minimizes the divisive nature of prayer, going as far back as the Constitutional Convention, when Benjamin Franklin's call for prayer was rejected. While the founders of our nation were, at best, of mixed opinion on governmental prayer, James Madison, the primary author of our godless and secular Constitution, weighed in solidly against congressional chaplaincies.

Six judges, including Chief Judge Cole, laudably dissented from the majority opinion. The dissent notes that the Jackson County Commissioners "refused to allow any non-Commissioners to give prayers . . . in order to avoid hearing prayers they would not like." When a member of the public voiced an objection to the prayers, one commissioner "made a disgusted face . . . and turned his chair around, refusing to listen" and another called the objecting citizen a "nitwit." This reprehensible behavior culminated in an objecting citizen being denied a seat on the county's Solid Waste Planning Commission and the Board of Public Works.

In a footnote, the Sixth Circuit majority ruling acknowledges that its decision runs counter to the Fourth Circuit's en banc decision in Lund v. Rowan County, handed down in July, which ruled that county commissioner-led prayers violate the Establishment Clause by impermissibly advancing religion. Far from clarifying the law, the Sixth Circuit decision muddies the waters for the rest of the country.

Governmental institutions should exercise neutrality on the topic of religion. No minority group or individual in a community should be treated differently by their elected officials due to their religious beliefs or rejection of such beliefs.

The Freedom From Religion Foundation continues some major challenges to government prayer. FFRF's ongoing challenges include lawsuits against courtroom prayer imposed by a justice of the peace in Montgomery County, Texas, prayer by the Chino Valley School District in California (now before the Ninth Circuit) and censorship of opening invocations by nonbelievers in a case with Americans United and the ACLU in Brevard County, Fla.