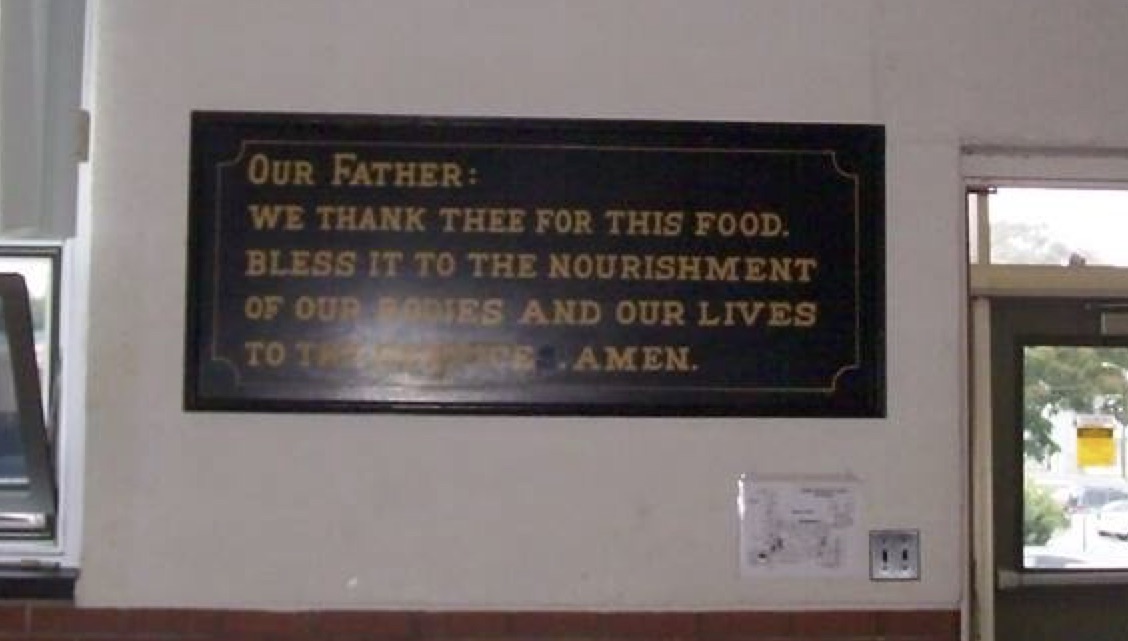 The Freedom From Religion Foundation salutes a Virginia elementary school for removing a plaque imprinted with a prayer.

A local member of the district had reported to FFRF that Spiller Elementary in Wytheville, Va., was displaying a large plaque in its cafeteria with a loud and clear religious message: "OUR FATHER: WE THANK THEE FOR THIS FOOD. BLESS IT TO THE NOURISHMENT OF OUR BODIES AND OUR LIVES TO THY SERVICE. AMEN."

This past May, FFRF sent a letter informing the district that courts have continually held that school districts may not display religious messages or iconography in public schools. Since the plaque at the school began with "Our Father," the plaque's message was clearly a prayer, and classrooms are not to be used to further religious ideologies that may conflict with the private beliefs of students and their families.

FFRF Staff Attorney Patrick Elliott informed Wythe County Public Schools Superintendent Jeff Perry that there is no educational or academic value in such postings — and, thus, the display existed purely for the sake of proselytizing.

"Elementary students should not have to view materials promoting a Christian message," wrote Elliott. "Wythe County has an obligation to ensure that its schools are welcoming to all students, not just those in the Christian majority."

FFRF requested that the school take immediate action to remove the prayer display from the cafeteria wall and received a response from Perry this month.

Perry wrote on Aug. 24 to inform FFRF that the plaque had been removed. FFRF is pleased that the district took prompt action to remedy the state / church violation.

"It's reassuring to see the school district take such swift action to ensure that all students feel welcome in its schools," says FFRF Co-President Annie Laurie Gaylor. "Schools, after all, should be used to further education, not religious ideologies."

The Freedom From Religion Foundation is a national nonprofit organization with more than 29,000 members across the country, including more than 680 in Virginia. Its purposes are to protect the constitutional principle of separation between state and church, and to educate the public on matters relating to nontheism.