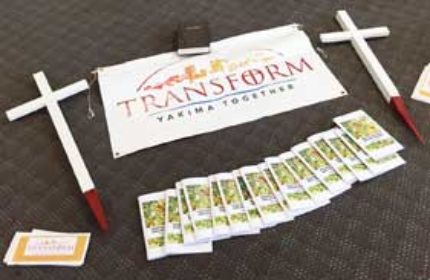 The Freedom From Religion Foundation is opposing the unconstitutional doling out of hundreds of thousands of dollars to a religious ministry in the state of Washington.

A concerned local taxpayer contacted FFRF to report that the Yakima Valley Conference of Governments recently granted $416,000 to Transform Yakima Together for operating a temporary homeless shelter, known as "Camp Hope," and for a housing project.

Transform Yakima Together is a religious organization whose six-point stated mission is entirely dedicated to promoting Christianity, including a disturbing emphasis on using the government to do so. According to its website, it aims to "establish the government of the Lord in the Valley," to "support local leaders in their efforts to make disciples who are Kingdom transformers" and to "empower the Church through a revelation of God's name as the Lord of Hosts to mobilize as a spiritual army of the Lord to project power to bring about the will of King Jesus in the Valley."

In addition to touting its evangelical crusade, Transform Yakima Together brags about converting residents of Camp Hope and invites churches to send "ministry teams" to the camp. The organization plainly views Camp Hope as a government-funded opportunity to advance religion.

The Yakima Valley Conference of Governments must take appropriate steps to ensure that the activities it funds are entirely secular, FFRF asserts. While providing housing for the homeless is obviously laudable, it is unconstitutional for a taxpayer-funded homeless camp to include religious exercises, or for the group managing the camp to invite "ministry teams" to proselytize camp residents. It makes no difference whether these government-funded religious activities are voluntary.

"The Establishment Clause of the First Amendment prohibits the government from financially supporting churches," FFRF Legal Fellow Ryan Jayne writes to Yakima Valley Conference of Governments Executive Director Larry Mattson. "Just as the Yakima Valley Conference of Governments could not conduct worship services itself, YVCOG-funded projects may not be used to advance religious activities."

Moreover, the state of Washington's Constitution specifically states, "No public money or property shall be appropriated for or applied to any religious worship, exercise or instruction, or the support of any religious establishment." Appropriating public money for the support of a religious establishment is exactly what the Yakima Valley Conference of Governments does by granting funds to Transform Yakima Together for projects that the ministry uses to advance its religious mission. The U.S. Supreme Court in 2004 upheld enforcement of this particular provision of the Washington Constitution, which goes above and beyond the anti-establishment guarantees of the U.S. Constitution.

"Governmental funding of such a theocratic organization flies in the face of constitutional precepts," says FFRF Co-President Annie Laurie Gaylor. "Yakima Valley officials need to ensure that they offer secular services to the homeless in an environment free from religious pressure or proselytizing."

Washington taxpayers have a religious liberty right guaranteeing that their government will not use its coercive taxation power to advance religion, FFRF emphasizes. The Yakima Valley Conference of Governments must ensure that programs it funds do not include religious exercises, do not aid a church's evangelical mission and do not otherwise promote religion in general or any one religion in particular. FFRF requests that the Yakima Valley Conference of Governments take immediate action to ensure that Camp Hope and Transform Yakima Together's taxpayer-funded housing project are not used to advance religion and that this flagrant constitutional violation does not recur with future grants.

The Freedom From Religion Foundation is a national nonprofit organization with more than 29,000 members and chapters across the country, including more than 1,200 members in Washington and two chapters in the state. FFRF's purposes are to protect the constitutional principle of separation between state and church, and to educate the public on matters relating to nontheism.