The lesson of Charlottesville: E Pluribus Unum must triumph

Statement by the Freedom From Religion Foundation 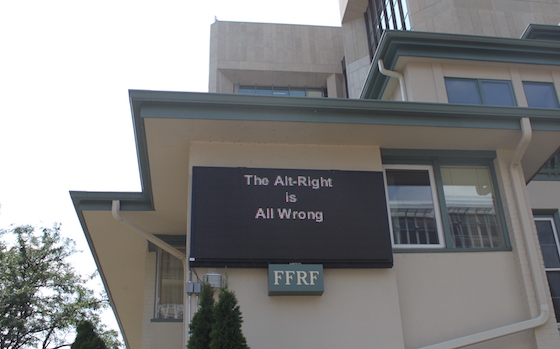 Along with the rest of the nation, we at the Freedom From Religion Foundation office have watched, with growing horror and dismay, as the hate-mongering white supremacist “Unite the Right” march in Charlottesville, Va., ended in hours of violence, mayhem and three deaths. Our collective heart goes out to the family of Heather Heyer, mowed down in an Alt-Right domestic terrorist attack where 19 others were wounded. It’s frightening that the rally’s leaders, instead of repudiating these actions, promise instead to return with a vengeance to Charlottesville and other communities engaging

Statement by the Freedom From Religion Foundation

Along with the rest of the nation, we at the Freedom From Religion Foundation office have watched, with growing horror and dismay, as the hate-mongering white supremacist “Unite the Right” march in Charlottesville, Va., ended in hours of violence, mayhem and three deaths. Our collective heart goes out to the family of Heather Heyer, mowed down in an Alt-Right domestic terrorist attack where 19 others were wounded. It’s frightening that the rally’s leaders, instead of repudiating these actions, promise instead to return with a vengeance to Charlottesville and other communities engaging in long overdue removal of statues honoring the Confederacy.

Our feelings turned to even greater revulsion and concern as the nation’s leader, charged with setting the moral tone in our country, has done the opposite, saying yesterday that there are “fine people on both sides” and holding the “alt-left” equally culpable.

Unlike President Trump, the rest of us do not find it hard to condemn swastika-wielding neo-Nazis, white nationalists, neo-Confederates and anti-Semites, who espouse that the United States is “fundamentally a white man’s country.”

One of the primary boosters of the Alt-Right, of course, is Trump’s own chief strategist, Steve Bannon, who is a notable arch-Roman Catholic. David Duke, the former grand wizard of the Ku Klux Klan who spoke at Charlottesville and called it an effort to “take the country back” and “fulfill the promises of Donald Trump,” is a “born-again” Christian. The KKK, the historically predominant white supremacist group, is an explicitly Christian organization. Klansmen began burning crosses “to spread the light of Jesus into the countryside.” FFRF Co-President Dan Barker has catalogued the racist verses in the bible, including verses in which God himself is a slavemonger.

White supremacists or nationalists can draw inspiration from the racist passage that “The Lord your God has chosen you out of all the peoples on earth to be his people, his treasured possession” (Deut. 7:6), claiming that the “other people” are inferior: “Do not intermarry with them” (Deut. 7:1-6). “They shall not dwell in thy land” (Exodus 23:23-33).

Although the KKK paved the way for the Aug. 12 hate march by holding two earlier rallies in Charlottesville this summer, today’s white supremacists may be different than the traditional KKK, according to an interview National Public Radio conducted with Professor George Hawley:

I would say it is definitely a young movement. I'd say that it is predominantly white millennial men. It is not sort of stereotypically conservative in its profile. I'd say that probably it is a more secular population than the country overall. That is, there are a lot of agnostics and atheists or people who are just generally indifferent to religion. And I think that it is a fairly well-educated movement on average, that as I think that probably the model alt-right member has at least some college education.

This exchange comes after a recent study again confirmed the continuing and undeserved bias against atheists and agnostics. Researchers studied and cataloged a disheartening phenomena: the “entrenched moral suspicion of atheists.” We would not like to see our movement tarnished by anecdotal speculations.

The freethought movement is still trying to overcome the ubiquitous defamation that Hitler was an atheist. Hitler, of course, died a Roman Catholic in good standing, made concordats with the Vatican and was never excommunicated. In Mein Kampf, Hitler explained: “By fighting off the Jews, I am doing the Lord's work.” Every Nazi soldier’s belt buckle notoriously proclaimed, Gott mit uns (God’s with us). The Holocaust was the horrific culmination of centuries of Roman Catholic and Lutheran anti-Semitism.

Raw racism does not spring from religion or irreligion. It is a harmful xenophobic tribalistic instinct that manifests itself in a certain subpopulation of our species. Abolitionist and former slave Frederick Douglass, who called slavery “a moral disorder” and the product of “a diseased imagination,” welcomed all belief systems into the anti-slave movement: “I would say, welcome infidelity! Welcome atheism! Welcome anything . . . in preference to the gospel, as preached [by those who] convert the very name of religion into an engine of tyranny and barbarous cruelty.” Religion has often provided a justification for racism, but it does not follow that religion is the cause. It also does not follow that if the Alt-Right of today welcomes some individuals “with a diseased imagination” who are indifferent to religion that atheism is to blame.

But should data back up the anecdotal interviews cited by Hawley about nonbelievers being a significant part of the membership and leadership of the Alt-Right — and we surely hope it won’t — FFRF repudiates and disassociates from any such individuals and their vile hate campaigns.

If it is found that many in the Alt-Right indeed have college degrees, does it necessarily follow that “higher education” would be accountable? Only if these racists matriculated from colleges with racist curriculums would there be culpability. Only if the freethought/atheist/secular movement were espousing and fomenting racism and violence would it be culpable (and it is not).

But in today’s frightening and increasingly ugly and divisive climate, FFRF and freethinkers would indeed be culpable if we did not speak out against racist hate groups seeking to destroy our nation and and its core principles. FFRF unequivocally condemns white supremacist hate groups, racism and the violence, hate and discord they are gleefully and unapologetically fomenting.

FFRF works to uphold constitutional principles, which include not only religious liberty, but revered principles of equality and equal justice under the law. We don’t believe in gods, but we do fervently believe in the “melting pot” of diverse peoples united together: E Pluribus Unum.