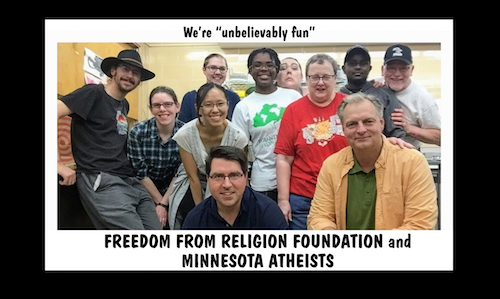 Baseball fans in the Midwest can look forward to a unbelievably good time this weekend.

The Freedom From Religion Foundation (FFRF) and Minnesota Atheists are co-sponsoring "atheist night" at St. Paul's CHS Field starting 7 p.m. this Saturday, Aug. 12, in which the St. Paul Saints minor league baseball team will play the Sioux Falls Canaries. It's the sixth consecutive year of "atheist night" with the St. Paul Saints, and the third one co-sponsored by the two freethinking organizations together.

"FFRF and Minnesota Atheists have partnered together on several projects," says FFRF Co-President Annie Laurie Gaylor, "but this is one of the most remarkable endeavors we have coordinated."

This night at the ballpark is billed as "Food For Thought" because fans are being asked to bring nonperishable food items to benefit The Food Group food bank, which works toward improving people's lives in this world — here and now. Here's some food for thought: Since the beginning of 2016, volunteers from Minnesota Atheists have helped sort and repackage 54,237 pounds of food to fight hunger in our community. This amount represents more than 45,000 meals. This is enough food to feed 1,255 families of four for a three-day period.

So far, the baseball gods have been kind to atheist-sponsored professional baseball. None of our sponsored games has been rained out or delayed by rain. The team has won three games and lost two at these unbelievable games since 2012.

Pre-game tailgating begins around 3 p.m. on Saturday at the parking lot under the Highway 52/Lafayette Bridge on Prince Street. It's two blocks southeast of CHS Field, and five short blocks from the Union Depot station on the Green Line.

Tickets in our group portal section are available now at SaintsGroups.com (password: foodforthought). It's $21 for the Infield ("Infidel") section and $11 in the General Admission section by left field. Both tickets come with a brand new 2017 hat. Seats are limited, and we sold out before the game last year. So don't wait too long! Those in attendance can expect to be entertained with atheist-themed antics between innings and can bid on the atheist-themed jerseys players wear during the game. Limited edition atheist-themed baseball T-shirts are available online for only $10.

The Wisconsin-based Freedom From Religion Foundation is the nation's largest association of atheists and agnostics, with more than 29,500 members nationwide and about 600 in Minnesota. It publishes a newspaper, broadcasts a radio show and video podcasts, and has a busy legal department.

Minnesota Atheists, the largest and oldest atheist organization in the state of Minnesota, seeks to promote positive atheism in action by participating in a variety of community events, monthly volunteer projects, public affairs, and educational programming.