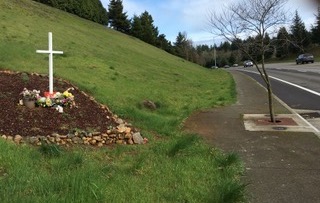 The Freedom From Religion Foundation is asking that a big cross on public property be relocated.

A concerned local resident informed FFRF that a large roadside cross, about 4 feet tall, is on permanent display in Salem off of Kuebler Boulevard just west of Stroh Lane. Reportedly, the city maintains the grass around the display, leading one to believe it is now city property.

"The religious significance of the Latin cross is unambiguous and indisputable," FFRF Managing Staff Attorney Rebecca Markert writes to Salem Mayor Chuck Bennett. "A majority of federal courts have held displays of Latin crosses on public property to be an unconstitutional endorsement of religion."

That's why it is blatantly unconstitutional for the city of Salem to display a patently religious symbol like a Christian cross on a public roadside. The Kuebler Boulevard cross unabashedly creates the perception of government endorsement of Christianity. And it conveys the message to the 30 percent of Americans who are not Christian, including the 23 percent of Americans who are not religious, that they are not "favored members of the political community," to quote the U.S. Supreme Court. The cross has an exclusionary effect, making non-Christian and non-believing residents of Oregon into political outsiders.

"The city shouldn't be spending scarce public resources in the maintenance of a sectarian agenda," says FFRF Co-President Annie Laurie Gaylor. "Many taxpayers in Salem would object to their hard-earned money going toward sprucing up crosses."

FFRF is asking the city to immediately move the cross from Kuebler Boulevard — and any other Latin cross display on Salem public property — to a more appropriate private location.

The Freedom From Religion Foundation is a national nonprofit organization with 29,000 members and chapters across the country, including more than 700 members and a chapter in Oregon. Its purpose is to protect the constitutional principle of separation between state and church, and to educate the public on matters relating to nontheism.