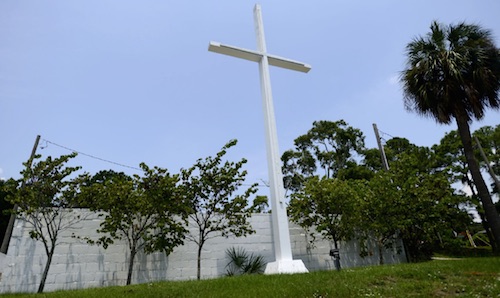 The Freedom From Religion Foundation is disappointed that the city of Pensacola is needlessly appealing a judicially ordered removal of a massive cross from a local park.

A few weeks ago, two of the country's leading secular organizations, FFRF and the American Humanist Association's Appignani Legal Center, achieved a major legal victory. On June 19, Senior U.S. District Judge Roger Vinson ruled that "the Bayview Cross can no longer stand as a permanent fixture on city-owned property." The 34-foot white Latin cross that the city of Pensacola owns, displays and funds dominates the Bayview Park. The cross is also the site of numerous Easter Sunrise services, frequently co-hosted by Christian churches.

Vinson ordered the cross removed within 30 days. The city had the option to appeal the case to the 11th U.S. Circuit Court of Appeals and has unfortunately opted to go that route.

The case was decided on clear, settled legal grounds. As Vinson pithily remarked, "The law is the law." Hence, it's a waste of both sides' time and money for Pensacola to appeal the constitutionally correct decision. The ruling by Vinson, a senior federal judge for the Northern District of Florida – Pensacola Division appointed by President Reagan, could best be characterized as begrudging. And yet he still comprehended the illegality of the Bayview Cross.

"This is not a 'borderline case,'" the judge stated. "The Bayview Cross clearly has a primarily — if not exclusively — religious purpose."

The city's decision to appeal seems to have been bolstered by the offer of the Becket Fund for Religious Liberty to represent it for free. Unfortunately, taxpayers are still on the hook for legal fees when FFRF and AHA win. The Becket Fund is a theocracy-rationalizing organization that FFRF has sparred with in the past and knows only too well. FFRF and the American Humanist Association are committed to seeing this case through to its rightful end.

"The city is at cross-purposes with the Constitution," says FFRF Co-President Annie Laurie Gaylor. "The Constitution demands that the Bayview Cross be removed."

The Freedom From Religion Foundation and the American Humanist Association's Appignani Legal Center filed the suit against the city on behalf of local plaintiffs who objected to the cross on public property. When the city refused to respond to warning letters and remove the cross from government property, the groups teamed up to take legal action in May 2016.

The plaintiffs in the case are Amanda Kondrat'yev; Andreiy Kondrat'yev; David Suhor and Andre Ryland. The case was brought by both FFRF and AHA, and handled by AHA's senior counsel Monica Miller and legal director David Niose, and FFRF staff attorneys Rebecca Markert and Madeline Ziegler. Case 3:16-cv-00195-RV-CJK

The Freedom From Religion Foundation, based in Madison, Wis., a 501(c)(3) nonprofit educational charity, is the nation's largest association of freethinkers (atheists, agnostics), and has been working since 1978 to keep religion and government separate. With more than 29,000 members and chapters all over the country, including almost 1,500 and a chapter in Florida, the organization also educates the public about nontheism.