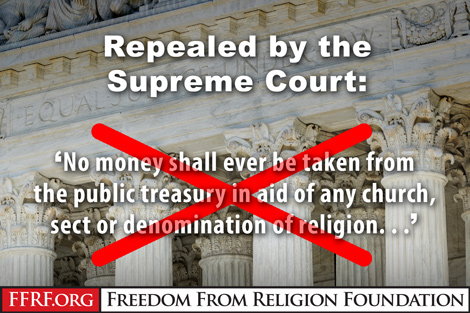 The U.S. Supreme Court issued a decision today that could inflict incalculable damage upon the constitutional wall of separation between state and church. Seven justices turned their backs on the hallowed principle that citizens should not be forced to financially support churches and church schools.

In a 7-2 vote, the court, in a decision by Chief Justice John Roberts, ruled in favor of Trinity Lutheran Church of Columbia, Mo., in its court battle against the state of Missouri. The church, which runs a religiously segregated day care, sued because it was excluded from a program that provides grants to nonprofits to resurface playgrounds with recycled tires. Missouri's Constitution, along with more than 30 other state constitutions, bars direct or indirect taxpayer funding "in aid of any church, sect, or denomination of religion."

The decision strikes a blow, possibly fatal, against treasured provisions in a majority of state constitutions whose prohibitions against taxpayer support of religion are more explicit than the First Amendment's Establishment Clause.

It has been a bright line rule since America's founding that the government will not fund religion or the free exercise of religion. Today, the Supreme Court destroyed that rule, claiming that a government funding program that is not open to churches "violates the Free Exercise Clause." This turns the steadfast rule on its head, admitting that government funds that flow to churches ultimately facilitate religious worship. Never in our history has the government been able to fund religious worship- until now.

On its face, the outcome seems benign: A church school can write a grant to replace asphalt or other pavement at a playground with retreaded rubber tires to make it safer. But in fact, the church school receiving this public improvement is free to proselytize the tots under its protection, and to discriminate in admission in favor of only Lutheran or Christian children, or any other criteria it cares as a private entity to adopt.

It's no surprise that President Trump's new appointee, Neil Gorsuch, joined Roberts and Justices Samuel Alito, Clarence Thomas, Anthony Kennedy, Stephen Breyer and Elena Kagan in siding with the majority. (What is more surprising is the extent to which Gorsuch agreed with Thomas in a concurring opinion.)

"The exclusion of Trinity Lutheran from a public benefit for which it is otherwise qualified, solely because it is a church, is odious to our Constitution all the same, and cannot stand," the decision reads.

"To hear the court tell it, this is a simple case about recycling tires to resurface a playground," she stated. "The stakes are higher. The case is about nothing less than the relationship between religious institutions and the civil government — that is, between church and state. The court today profoundly changes that relationship by holding, for the first time, that the Constitution requires the government to provide public funds directly to a church. Its decision slights both our precedents and our history, and its reasoning weakens this country's longstanding commitment to a separation of church and state beneficial to both."

The Freedom From Religion Foundation was part of an amicus brief against Trinity Lutheran, which pointed out that direct grants to churches clearly violate the Establishment Clause, making the state prohibitions constitutional.

This case shames the high court in another way: It should never have been decided. The state of Missouri, a week before the April oral arguments, changed its policy and permitted churches to compete for the grants, mooting the case. The court would kick most cases to the curb where the parties agree, but here, the majority simply passed over this in a footnote. Clearly, a majority on the ultra-conservative court was keen on using this opportunity to eviscerate many state provisions predicated on Thomas Jefferson's original Virginia Statute for Religious Liberty.

The heart of the Jefferson statute guarantees that no citizen may be forced to pay taxes that are used to erect, attend or support any place of worship.

Some 33 state constitutions have language, often referred to as the Blaine Amendment, that contain strong guarantees against public support of religion. Article 1, Section 7 reads: "That no money shall ever be taken from the public treasury, directly or indirectly, in aid of any church, sect or denomination of religion, or in aid of any priest, preacher, minister or teacher thereof, as such; and that no preference shall be given to nor any discrimination made against any church, sect or creed of religion, or any form of religious faith or worship."

James Madison, the father of the First Amendment, opposed even a three-penny tax to benefit churches. Unfortunately, a decision approving what may appear at first blush to be a minor usage of tax dollars may open the floodgates. Today's decision guts Jefferson's and Madison's wise counsel against forcing taxpayers to spend even "threepence" in support of religion. We will all suffer the consequences.