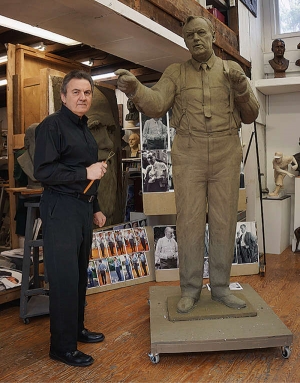 The Freedom From Religion Foundation, thanks to the support of its members nationwide, is proudly underwriting an impressive monument to the eminent civil libertarian who fought perhaps the most famous legal battle in U.S. history.

The statue of legendary lawyer and rationalist Clarence Darrow is to be dedicated on Friday, July 14, right in front of the site of the historic Scopes evolution trial: the Rhea County Courthouse in Dayton, Tenn.

A local statue of Darrow's legal adversary, William Jennings Bryan, given to the county by the William Jennings Bryan College, inspired talented sculptor Zenos Frudakis, FFRF and others to seek to remedy the "missing link." Darrow will soon take his rightful place adjacent to Bryan on the courthouse lawn. Darrow defended John Scopes when he was charged with teaching evolution at the 1925 "trial of the century."

Frudakis, based in Philadelphia, is creating the 7-foot bronze statue of the famed attorney, to be installed July 13 upon a 3-foot high base. Frudakis is a renowned American sculptor who has created an extensive, award-winning collection of more than 100 bronze sculptures in public and private collections. FFRF is contributing the lion's share of costs: $150,000, made possible through the generosity of its members.

The dedication will begin in front of the courthouse at 10 a.m. on Friday, July 14, and will include actor John de Lancie, who played Q in "Star Trek: The Next Generation." Andrew Kersten, author of the 2011 biography, "Clarence Darrow: American Iconoclast," will speak about Darrow and his "frenemy" relationship with Bryan. Kersten is dean of the College of Letters, Arts and Sciences at the University of Idaho-Moscow. Margaret Downey with the Freethought Society will emcee. FFRF Co-Presidents Dan Barker and Annie Laurie Gaylor will also say a few words. Barker, a professional musician, will set the tone prior to the dedication by a rendition of twenties music. The short dedication will end with Frudakis unveiling his creation.

The 2017 Scopes Trial and Festival will kick off shortly after with bluegrass music, booths and other festivities.

"We're thrilled to be working with an internationally known sculptor in making this gift, not just to Rhea County and its historic courthouse, but to posterity," says Gaylor. "This magnificent statue of Darrow will enhance Rhea County's history, and be a draw for generations to come."

FFRF is holding a Clarence Darrow Celebration on Thursday, July 13, the evening before the dedication, at The Chattanoogan Hotel, in Chattanooga, Tenn. This includes a Southern buffet, more music by Barker, socializing, speakers Frudakis and Kersten, guests of honor Nicole Jacobsen, Ro Frudakis and William Dusenberry. Fred Edwords of the American Humanist Association, which forwarded donations of several hundred dollars toward the statue, will say a few words. Pre-registration is required. Advance registration for the private event is required.

FFRF also encourages participants to join FFRF and its guests at the kickoff on July 14 of the annual Scopes Trial play, which is held in the courthouse itself. Purchase tickets here.

Click here to make a tax deductible donation to FFRF for the artistic project (use the dropdown to designate for the Darrow statue).