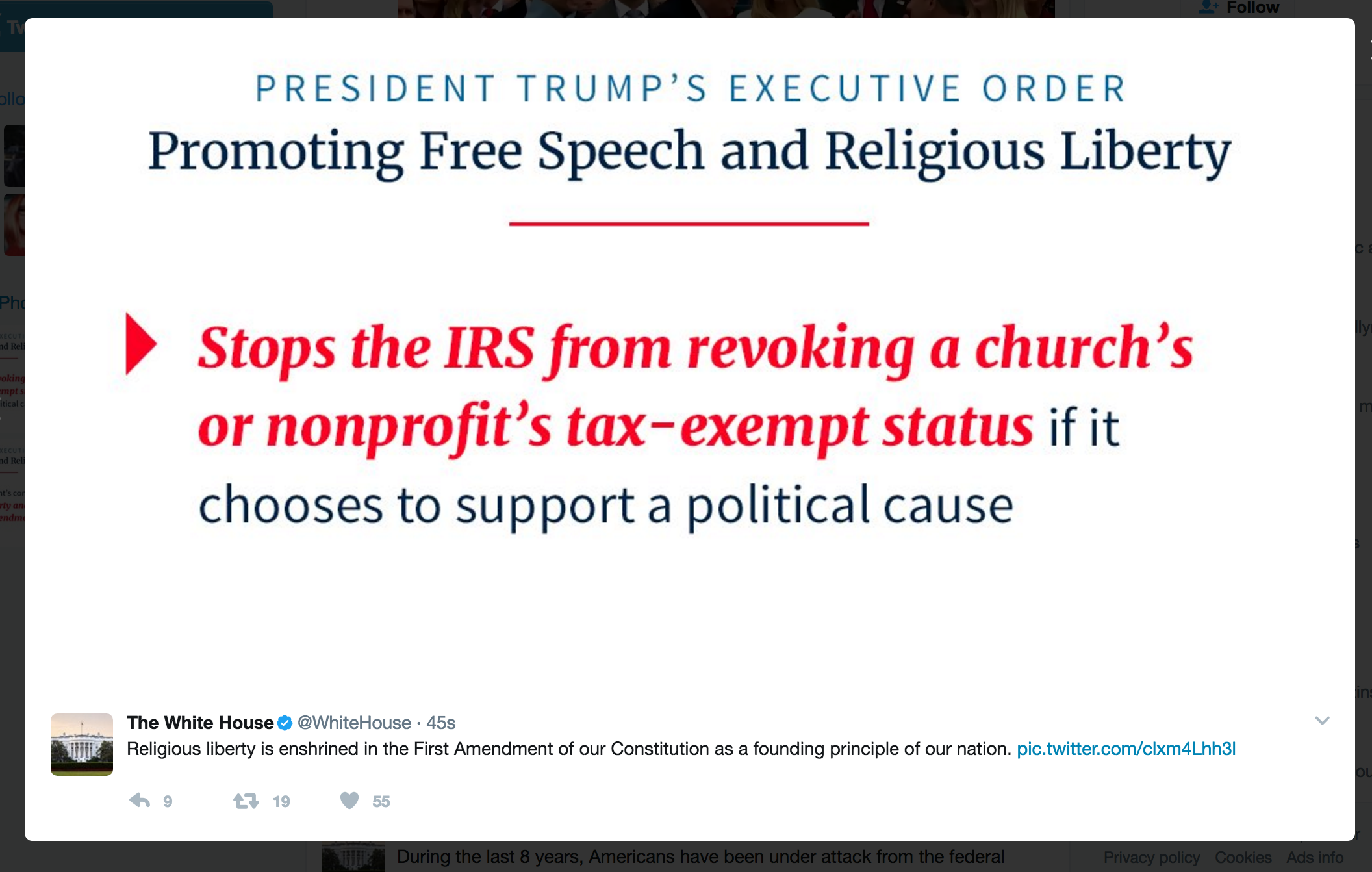 FFRF’s lawsuit was filed on May 4 in the U.S. District Court, Western District of Wisconsin. FFRF and co-plaintiffs FFRF Executive Directors Dan Barker and Annie Laurie Gaylor assert that Trump has used this order to usher in a new era of church politicking to the exclusion of secular organizations.

Trump signed the executive order with great fanfare during a National Day of Prayer ceremony in the Rose Garden before a largely clerical audience. Trump said:

"This executive order directs the IRS not to unfairly target churches and religious organizations for political speech. No one should be censoring sermons or targeting pastors. [Standing ovation.]   . . . In America we do not fear people speaking freely from the pulpit, we embrace it.”

Trump also told churches that, with his new order, they would not lose their tax exemption for violating the rule and could say whatever they wanted: “This financial threat against the faith community is over.    . . . You’re now in a position where you can say what you want to say.”

Among its several abuses, Trump’s order and statements signal to the Internal Revenue Service that it should not enforce the electioneering restrictions of the tax code against churches and religious organizations, while permitting these restrictions to be enforced against secular nonprofits. FFRF asserts the president has no constitutional authority to selectively veto a legitimate statute that Congress passed and a president signed into law more than 50 years ago.

This part of the law is known as the Johnson Amendment. Under the amendment, all organizations that are recognized as exempt from federal income tax under §501(c)(3) of the Tax Code are subject to the prohibition against political campaign intervention.

The Freedom From Religion Foundation, a 501(c)(3) nonprofit, contends that Trump is violating its equal protection rights and favoring church groups over secular groups, in violation of the Establishment Clause of the First Amendment to the U.S. Constitution. Trump has directed the IRS to do something for which they both lack any enumerated or implied power: to selectively enforce a legitimate statute based solely on religion.

Even if the precise language of the executive order does not accomplish Trump’s promise to “totally destroy the Johnson Amendment,” the impression his administration is actively trying to foster among evangelical Christians is that the IRS will no longer enforce the Johnson Amendment against them.

The state/church separation watchdog sued the IRS in 2014 for its failure to enforce the electioneering restrictions and settled the suit after the IRS agreed to begin implementing these restrictions.

FFRF has public opinion on its side. According to an evangelical polling group, Lifeway Research, whose slogan is “Biblical Solutions for Life,” nearly 80 percent of Americans say it’s inappropriate for pastors to endorse a candidate in church, and 75 percent do not believe it is appropriate for churches to publicly endorse candidates.

As advertised by Trump, the executive order effectively provides preferential treatment to churches and will result in obligations on secular nonprofits, including the plaintiffs, that are not imposed on churches. This could amount to more than $100 million annually in tax-free contributions for politicking pastors.

“Trump is communicating to churches that his administration will not enforce the Johnson Amendment,” says Gaylor. “The IRS needs clear direction that it must enforce the law equally.”

FFRF’s legal complaint enumerates Trump’s many public avowals to repeal the Johnson Amendment restrictions against churches. For instance, Trump promised a closed-door group of hundreds of Christian conservatives in June 2016 that overturning the Johnson Amendment “will be my greatest contribution to Christianity, and other religions. ” At the National Prayer Breakfast in February, Trump vowed to “get rid of and totally destroy the Johnson Amendment.”

FFRF is asking the court to declare that Trump has violated the Establishment Clause and the Due Process Clause of the U.S. Constitution, and acted in excess of presidential authority under Article II of the Constitution.

“As Judge Barbara Crabb noted in that ruling, the government has taken sides on a matter that must be left to individual conscience,” Gaylor observes.

The Freedom From Religion Foundation is a nonprofit membership organization that advocates for the separation of church and state and educates on matters relating to nontheism. It has more than 28,000 members, residing in every state of the United States, including more than 1,400 in Wisconsin, as well as members in the District of Columbia.