Making history by telling the truth 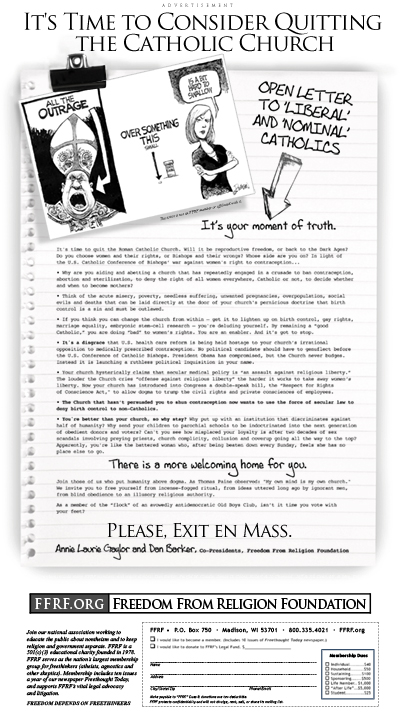 The Freedom From Religion Foundation placed an open letter via a full-page ad in today’s New York Times (page 10, front section) urging liberal and nominal Roman Catholics to “quit” their church over its war against contraception.

Beginning “It’s your moment of truth,” the ad asks: “Do you choose women and their rights, or Bishops and their wrongs? You are an enabler. And it’s got to stop.”

“As a member of the ‘flock’ of an avowedly antidemocratic Old Boys Club, isn’t it time you vote with your feet? Please, exit en Mass,” requests the ad, signed by FFRF Co-Presidents Annie Laurie Gaylor and Dan Barker.

The ad features a cartoon by Steve Benson depicting an angry bishop, with a woman next to a birth control pill telling him: “All the outrage over something this small is a bit hard to swallow.”

The ad blasts the church’s “pernicious doctrine that birth control is a sin” and the “Respect for Rights of Conscience Act” introduced into Congress to impose church dogma on employees. FFRF warns the liberal Catholic that the church is “launching a ruthless political Inquisition in your name.”

“It’s a disgrace that U.S. health care reform is being held hostage to your church’s irrational opposition to medically prescribed contraception. No political candidate should have to genuflect before the U.S. Conference of Catholic Bishops.”

Gaylor called “The war against contraception and reproductive liberty the state/church issue of our day.”

She called the ad a “ ‘telling truth to power’ moment,” adding that “The Roman Catholic hierarchy would wither away without the support, financial and otherwise, of its members. They must be accountable for what is being done in their name.”

The ad concludes by inviting nominal Catholics to “join those of us who put humanity above dogma.”

FFRF warmly thanks the outpouring of support by hundreds of FFRF members and others who helped FFRF raise $52,000 in just one weekend, making possible the stand-by ad.