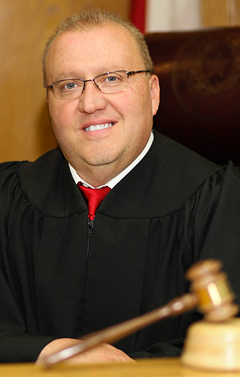 A national state/church watchdog and three individuals have filed a federal lawsuit to stop a Texas justice of the peace from imposing prayers at the start of each court session.

The Freedom From Religion Foundation, along with three plaintiffs directly affected by Judge Wayne Mack's religious rituals, filed suit today in the U.S. District Court for the Southern District of Texas in Houston. They are asking the court to rule the Montgomery County courtroom prayer practice a violation of the Establishment Clause of the First Amendment.

FFRF has more than 27,000 members, with 1,200 living in Texas, including plaintiff "Jane Noe," who has appeared before Mack on official business. The legal complaint notes: "Ms. Noe is an atheist. She does not believe in any supernatural higher power, and being subjected to religious prayer by a government official violates her sincerely held beliefs."

Plaintiff Jane Doe is a licensed attorney who has appeared before Mack on at least four separate occasions. While Doe is Christian, she "objects to a government official telling her when or how to pray."

Plaintiff John Roe, a self-employed attorney who regularly represents clients in front of Mack, "is religiously unaffiliated and objects to being subjected to religious prayers" in a courtroom.

All felt compelled to remain in the courtroom during Mack's prayers at risk of jeopardizing their cases and careers, or their clients' cases. (Read memorandum in support of plaintiffs' motion for leave to proceed using pseudonyms and for protective order.)

Mack is a graduate of the Jackson College of Ministries, where he majored in theology. He ran for justice of the peace in 2014 on a platform of reinstituting religious values within the office, partly by implementing a chaplaincy program. He established a volunteer chaplaincy program within his first weeks of office. He also holds annual Christian Faith & Freedom Prayer Breakfasts, announcing at the 2014 event: "As the justice of the peace, I will bring the Prince of Peace to work with me every day."

Before Mack starts each of his court sessions, he introduces a "visiting pastor," outlining his credentials, advertising the church he is from and where it is located. The guest chaplain often reads or sermonizes from the Christian Bible, then asks all attendees to bow their heads and pray. All prayers witnessed by the plaintiffs have been Christian in nature.

FFRF sent a complaint letter to Mack in 2014 asking him to cease his courtroom prayers, but did not receive a reply. In October 2014, FFRF Staff Attorney Sam Grover filed a formal complaint with the Texas State Commission on Judicial Conduct, whose investigation lasted over a year. In November 2015, the commission declined to discipline Mack, citing lack of authority to decide whether the practice violates the Establishment Clause, but cautioning Mack to end or substantially change the practice.

The legal complaint asserts that due to his "considerable influence and power as a justice of the peace, Judge Mack exerts coercive influence over those in his courtroom, effectively compelling their participation in his religious practice." FFRF is seeking a judgment enjoining Mack from opening his court sessions with prayer and declaring his actions a violation of the Establishment Clause of the First Amendment.