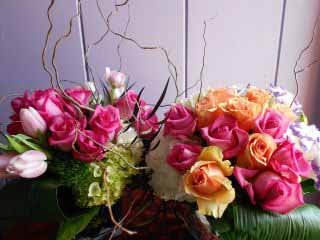 FFRF arrangement sent to Jessica. The flower shop issued this warm statement on their Facebook page:
"Glimpse of Gaia fully supports our First Amendment and will not be bullied by those who do not. Here's to you, Jessica Ahlquist!"

The Freedom From Religion Foundation this afternoon filed a formal complaint with the State of Rhode Island Commission for Human Rights, alleging “illegal discrimination based on religion” when a flower shop in Cranston refused, on the basis of religion, to fill an order to send a dozen roses to Jessica Ahlquist.

Jessica, 16, has been treated as a pariah by many in her Cranston community for being the lead plaintiff in a federal lawsuit that resulted last week in a court order to remove an illegal prayer banner at her high school auditorium.

The complaint, filed by FFRF’s Senior Staff Attorney Rebecca Markert, notes that FFRF, based in Madison, Wis., is “the nation’s largest association of freethinkers — atheists, agnostics and skeptics,” and that “Ms. Ahlquist is an outspoken atheist who has made national headlines because of her involvement in a federal lawsuit against the Cranston School District.”

Markert lays out the facts, noting that on Tuesday, FFRF Co-President Annie Laurie Gaylor, wishing to send a bouquet of roses to congratulate Jessica, contacted a shop based in Madison, Wis., to assist with the delivery. FFRF understands at least three florists in Cranston were contacted on Wednesday.

• Floral Express, in Cranston, on Wednesday messaged the Madison shop via Dove Network, an electronic order service, that it was “closed on the requested delivery day” (which was the same day) and “. . . I am not able to fill this."

• At 2:12 p.m. Wedneday, the Madison florist was contacted by Twins Florist, refusing the order via Dove Network message: “I will not deliver to this person.”

• Then Flowers by Santilli in Cranston was contacted by phone. The owner, upon hearing the name of the recipient, said he would rather not get involved and refused to fill the order.

• Seeking to go outside Cranston, the Madison flower firm on Wednesday next contacted Greenwood Flower and Garden in Warwick, which agreed to accept the order, but today called back saying patrons were phoning and emailing threatening to boycott his business so he refused the order, too.

FFRF was forced to go to an out of state business, Glimpse of Gaia, in Putnam, Conn., which not only agreed to deliver the flowers but threw in a second bouquet from the shop with its own message, “Glimpse of Gaia fully supports our First Amendment and will not be bullied by those who do not. Here’s to you, Jessica Ahlquist.”

Under R.I.G.L. 11-24-2, it is unlawful for a place of accommodation to deny services “on account of religion.”

Wrote FFRF to the commission: “Twins Florist violated this statute when it refused the order by FFRF and it stated in its refusal that it would not 'deliver to this person.' " Furthermore, FFRF was harmed by this refusal, which was based on Ms. Ahlquist’s atheism and FFRF’s support of her. FFRF was forced to find a store out of state to accept the order and make a belated delivery to Ms. Ahlquist.

“We ask that the Commission for Human Rights in Rhode Island commence an immediate investigation into this matter.”

Unbelievably, the three Cranston shops have put up their own Facebook page, “I stand with the Cranston florists,” seeking public support.

“They must grow ’em mean in Rhode Island,” commented Gaylor.

FFRF has heard from folks as far away as Sweden and Denmark wishing to support Jessica, some supporters saying they would be ordering flowers for Jessica from the Connecticut shop themselves.