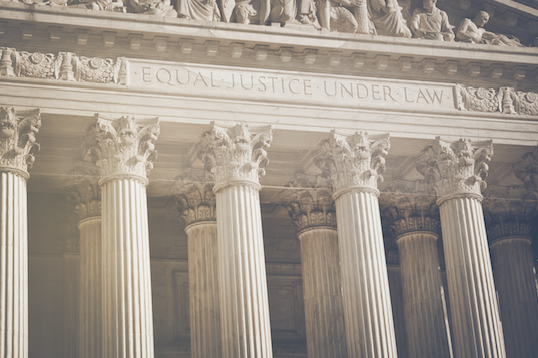 A leaked presidential executive order draft that the Trump administration is floating reveals a sweeping and alarming agenda to permit discrimination, dismantle the Civil Rights Act and other protections in the name of

A leaked presidential executive order draft that the Trump administration is floating reveals a sweeping and alarming agenda to permit discrimination, dismantle the Civil Rights Act and other protections in the name of "religious freedom."

The proposed "Executive Order Establishing a Government-wide Initiative to Respect Religious Freedom" would authorize special privileges and legal exemptions to religionists, particularly benefiting the Religious Right. If Trump issues this executive order, he would be fulfilling virtually every item on the Religious Right's wish list.

In summary, the proposal, if adopted, would allow any governmental agency or private corporation citing a religious objection to discriminate against certain classes of citizens, such as LGBTQ or women seeking contraception, It would allow the type of discrimination that got Kim Davis removed from her governmental position in Kentucky.

The order very clearly violates the clause of the First Amendment that FFRF works to protect every day: the Establishment Clause. At its core, this proposal would privilege religion — and though it never mentions it by name, Christianity. Trump would give the Religious Right a blanket exemption to every rule it doesn't like and allow it to impose its discriminatory and often cruel morality on others. Put simply, this grants believers a license to break laws that conflict with their religion.

Nearly 150 years ago, in an 1878 ruling, the U.S. Supreme Court pointed out that while the right to believe is absolute, the right to act on those beliefs is not. The court then posed this easy hypothetical: "Suppose one believed that human sacrifices were a necessary part of religious worship, would it be seriously contended that the civil government under which he lived could not interfere to prevent a sacrifice?" Under Trump's executive order, this hypothetical would no longer be easy to answer.

However, President Trump can't change laws (he's not the legislative branch) and he can't change administrative or agency rules without following the lengthy rulemaking process laid out in federal law. So instead, Trump, were he to sign this proposal, would be telling the agencies and personnel under his control that they cannot enforce the rules that he doesn't like.

Because this executive order favors religion over nonreligion and because it grants religion a license to violate any law that clashes with its mentality, it is unconstitutional. FFRF will fight it.

For a section-by-section summary of Trump's proposed executive order, and a description of how each provision would eviscerate civil rights and other protections for minorities — all in the name of "religious freedom" — click here.

How would this executive order work?

Executive orders are meant to implement federal law, but can run into legal problems when they seek to change the law, rather than implement it. That's what conservatives have been arguing for eight years under President Obama. Texas and 25 other states even sued Obama for his executive order on immigration. The Supreme Court added an issue for review to that case (an extraordinary step) to examine whether the president violated his constitutional duty to "take care that the laws be faithfully executed." (Article II, Section 3) The arguments briefed in that case, especially by some of the key players on the Religious Right, present some problems for Trump's order.

Mich. school system gets rid of Christian displays due to FFRF

A collaboration between an Indiana public school and a proselytizing ministry needs to be terminated, urges the…

It’s long past time for public officials and our nation to embrace the inevitable: The way…