REASON AND THE CONSTITUTION PREVAIL 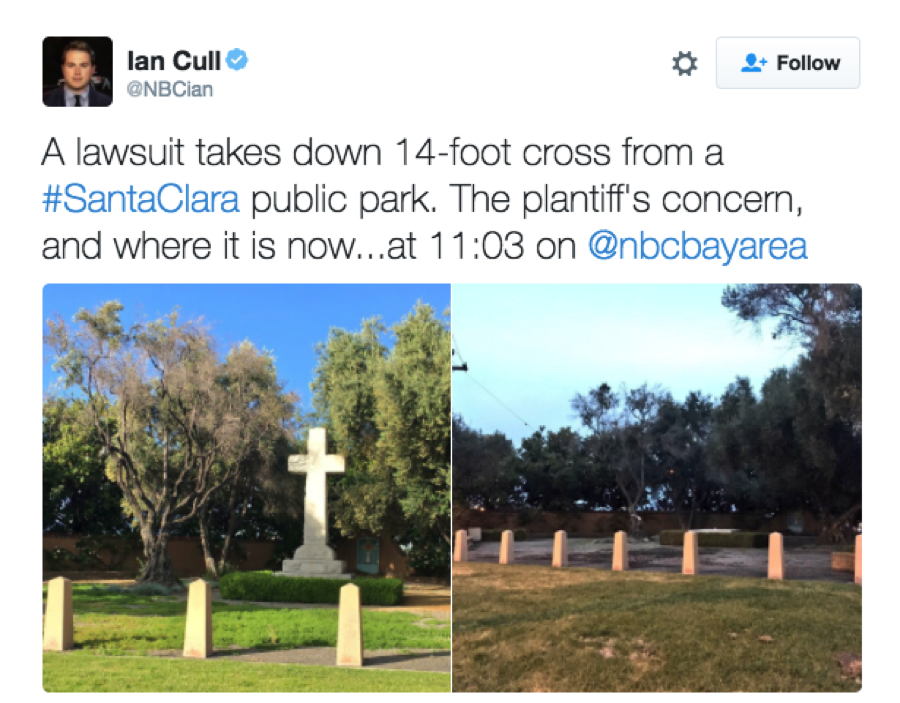 Local media tweet showing before and after photographsA 14-foot granite cross in a public park in Santa Clara, Calif., was recently removed, following a federal court challenge by the Freedom From Religion Foundation.

Local media tweet showing before and after photographsA 14-foot granite cross in a public park in Santa Clara, Calif., was recently removed, following a federal court challenge by the Freedom From Religion Foundation.

FFRF and a local member sued the city in April 2016, after FFRF had attempted for four years to persuade the city to remove the cross without litigation.

The cross was donated by the Santa Clara Lion's Club in 1953 for the decidedly nonsecular purpose of marking the site of the second Spanish Catholic mission, which had been established in 1777.

As part of the ongoing settlement, the city has donated the cross to the Catholic Santa Clara University. FFRF did not receive prior notification about the removal, learning via South Bay NBC (see tweet above) that it was no longer in the park as of late Friday, Jan. 13.

"We're happy that the city divested itself of this religious symbol, and that the Constitution is now being complied with," says FFRF Managing Staff Attorney Rebecca Markert.

Markert and other FFRF staff had written or phoned the city on more than a dozen occasions since first contacting the city over the Establishment Clause violation in April 2012. The city had indicated in 2012 that it looked forward "to resolving this matter in an expeditious and responsible manner."

"It's a very rational way to begin the New Year — sending a strong message of support of the wall of separation between religion and government," says FFRF Co-President Annie Laurie Gaylor. "Reason and the Constitution have prevailed."

The Freedom From Religion Foundation and its member had asked the U.S. District Court for the Northern District of California — San Jose Division, to declare the city cross in violation of Establishment Clause of the First Amendment to the U.S. Constitution, as well as the No Preference Clause of Article I, § 4 of the California Constitution.

FFRF v. City of Santa Clara is being litigated on behalf of FFRF by David J.P. Kaloyanides, with FFRF attorneys Rebecca Markert and Madeline Ziegler serving as co-counsel. The case, No. 5:16-cv-02072, remains before Judge Lucy H. Koh, a President Obama appointee, until the final settlement papers are signed.