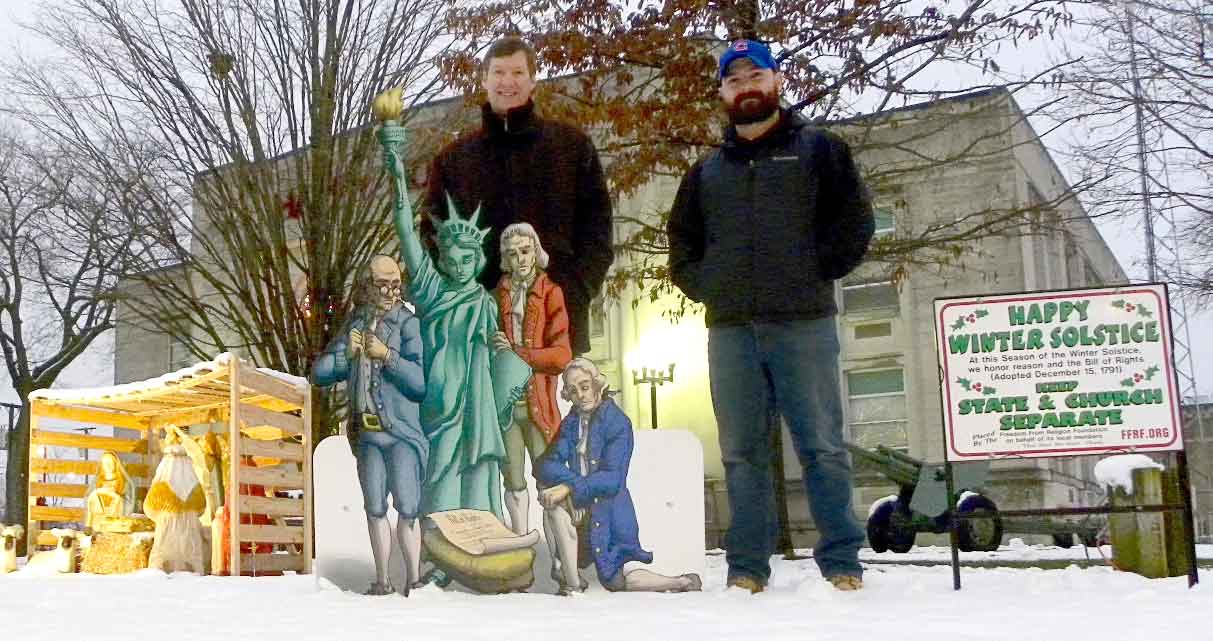 Members of the Freedom From Religion Foundation have erected a freethinking display at an Illinois county courthouse to counter a nativity scene.

W.P. Meyer and Ryan Bell first obtained the display last year from the state/church separation watchdog to set up in the grounds of the Grundy County courthouse in Morris. Traditionally, a Christian nativity scene owned by the Morris Ministerial Association was the sole exhibit there. But FFRF asserted that the county could face a lawsuit if it didn't remove the nativity scene or open the grounds to any group. The Grundy County sheriff, who manages the courthouse grounds, then adopted a formal policy allowing individuals and organizations to place displays.

The mainstay of the exhibit is a whimsical Bill of Rights "nativity." The cutout depicts the Statue of Liberty and Founding Fathers Benjamin Franklin, Thomas Jefferson and George Washington gazing in adoration at a "baby" Bill of Rights.

"Happy Winter Solstice. At this Season of the Winter Solstice, we honor reason and the Bill of Rights (adopted Dec. 15, 1791). Keep State & Church Separate." At the bottom it reads: "Thou shalt not steal, please."

Occurring on Dec. 21 in 2016, the Winter Solstice marks the shortest, darkest day of the year, heralding the symbolic rebirth of the sun. It has been celebrated for millennia in the Northern Hemisphere with festivals of light, evergreens, gift exchanges and seasonal gatherings. The Bill of Rights — the document on which our freedoms are based — also came into being during this season.

The exhibit is permitted to be up through the end of December.

"We'd much prefer that government property, judicial or otherwise, be free from religion — and irreligion," says FFRF Co-President Dan Barker. "But if a devotional nativity display is allowed, there must be 'room at the inn' for all points of view, including irreverence and freethought."

The Freedom From Religion Foundation is a nontheistic organization with almost 25,000 members and chapters all over the country and 800-plus and a Chicago chapter in the state of Illinois.