Citizens shouldn’t be forced to vote in mosques — or churches 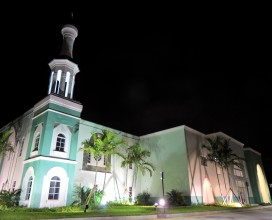 A Florida county should not be using houses of worship as polling places in the upcoming election, as an incident there earlier this year demonstrates.

In July, Elections Supervisor Susan Bucher removed The Islamic Center of Boca Raton as a polling location in Florida's Palm Beach County after some voters reportedly complained. The Freedom From Religion Foundation condemns the alleged fear-mongering and bigotry against Muslims that plagued this case, but we agree with the result: Palm Beach County should not use a religious institution or place of worship as a polling site.

FFRF has sent a letter to Bucher explaining that the county is really missing the point: The problem is forcing citizens to vote in any house of worship. Palm Beach County currently considers it acceptable to use 90 Christian churches and Jewish synagogues for polling places. Its decision to bar the mosque reveals governmental preference for dominant religions over other religions.

"Moving the polling location from the mosque while simultaneously keeping churches and synagogues unlawfully shows preference for Christianity and Judaism over all other religions and nonreligion," FFRF Managing Staff Attorney Rebecca Markert writes to Bucher. "This violates the Establishment Clause of the U.S. Constitution."

There are a host of problems with houses of worship being used as polling sites in Palm Beach County or elsewhere in the United States.

First, many of these sites are used for religious services. Religious imagery is pervasive in a lot of these venues and oftentimes is in direct view of voters. FFRF has received complaints of voting booths directly underneath paintings of Jesus, large Christian crosses and nearby bibles and posters with biblical verses on them.

Furthermore, there are numerous cases across the country of religious institutions exploiting their position as polling sites to promote their churches or causes. FFRF has received reports of churches handing out literature about their services and posting sign-ups for their bible studies.

The most egregious abuses, however, come when religious centers used as polling places take the opportunity to speak out on ballot initiatives or referenda at issue in the election, or improperly endorse or oppose a candidate. This has come up frequently in the recent past when same-sex marriage bans have been considered in states across the United States.

FFRF strongly urges Palm Beach County to remove all houses of worship as polling places in future elections. There are plenty of secular options available that could be relied on not to abuse the voter trust.

The Freedom From Religion Foundation has a national enrollment of more than 23,000 nonreligious members, including 1,000-plus individuals and a chapter in Florida.