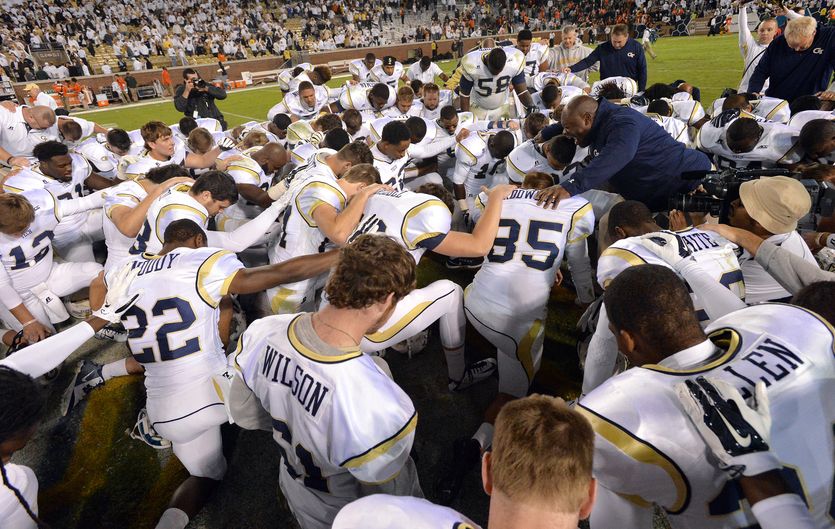 At the start of football season, the Freedom From Religion Foundation is renewing its objection to Georgia Tech's football chaplaincy.

FFRF initially contacted the university in August of last year to complain about its chaplaincy program, enclosing a broader national report. FFRF received an emailed acknowledgment after a week. However, there still has been no response to date about any actions to remedy the situation.

Derrick Moore continues to serve as Georgia Tech's football chaplain and receives compensation from Georgia Tech for his religious services. Moore regularly prays with the team before games, while wielding a sledgehammer. Maintaining such a chaplaincy program violates the Establishment Clause of the First Amendment.

The idea that such religious activities are truly optional is questionable, at best. FFRF's report concluded that "athletes do not view coaches' suggestions as optional." Moreover, "coaches add to this pressure by sending chaplains to talk with players going through difficult times, instead of allowing players to seek out their own religious or professional counseling."

"Even if the chaplaincy were strictly voluntary, that fact does not alter the unconstitutionality of the practice," FFRF Co-Presidents Dan Barker and Annie Laurie Gaylor write in a letter to Georgia Tech President G.P. Peterson. "Courts have summarily rejected arguments that voluntariness excuses a constitutional violation."

Additionally, Georgia Tech has only a Christian chaplain, showing an unconstitutional preference for Christianity. This is in spite of the fact that 44 percent of college-aged Americans are non-Christian and fully a third of millennials identify as nonreligious, according to the Pew Research Center.

In order to aid the university in protecting its students from religious discrimination, FFRF is also recommending the adoption of a model policy, which includes the maintenance of complete official neutrality in matters of religion. If adopted, this model policy would not only bring the university into compliance with the law but it would send the message that Georgia Tech values the rights of every student athlete to hold his or her own religious or nonreligious views, free from direct or indirect coercion or contrary endorsement.

"Apparently, we need to sledgehammer Georgia Tech officials in order to get any meaningful response," Barker adds.

The Freedom From Religion Foundation is a nationwide nonprofit organization dedicated to the separation of state and church, with almost 24,000 nonreligious members across the country, including more than 400 in Georgia and an Atlanta-area chapter.